Superstar ~ Return of the Space Squid

To read part one, click here. From that post, you can click on the link at the end of part 1 to be taken to part 2, which takes you to the next part and so on...
24th Feb - I was on my way into Set C, when I ran into Aunt Arctic. She was very busy, but she still smiled and waved to me. Even Aunt Arctic knew who I was! The cameras were blinding today, and everything seemed like a blur. Filming for Set C had to start straight away, because it has to be finished in 2 days! They didn't give one of the best parts out, and they gave it to me yestarday! I'm in a scene with Bubsey and Pingywin. They're the space squids, and they have to chase me! We started filming at around 1 o'clock. We did scene 6 where the spaceship crashes. I'm the one who crashes it - they needed me to do the stunts, especially jumping from the explosion just before the spaceship lands on the planet. Then, I find the aliens. Scene 7 was the hardest bit. I had only just learnt my lines, and I was trying really hard to remember them all. Being a superstar is really hard, but really fun! I've got a pounding headache, and there's just too many cameras flashing about. But that doesn't matter. In Scene 7, it was the deadly pursuit. One of the penguins falls down into the galaxy, and I have to rescue him before Bubsey and Pingywin get us. They don't, in the end, though. The pursuit ends when Bubsey, who becomes more and more irratic, accidently opens a wormhole and everybody is nearly sucked in... 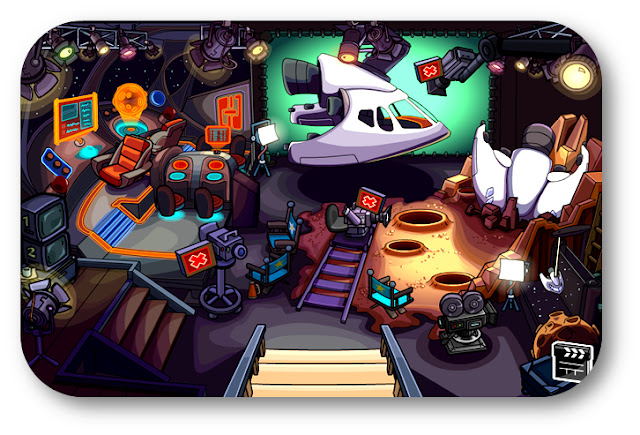 ...I manage to escape quickly and end up in the control room! I use the controls of the dead spaceship and open up a teleport. But Bubsey and Pingywin end up coming along too! We land somewhere far away in the galaxy, just floating around in space. It turns out the planet the spaceship crashed onto was actually a meteor. And it comes our way! We have to scramble left and right. There's not just one meteor, there's a whole bunch of them. This scene really is the hardest (it's the last one too) and we're on invisible ropes (so small that you can't see them) flying in front of the green screen which turns it into the galaxy. The ending is the worst part. I end up getting hit by a meteor (one of my stunts) and get badly injured. There's nobody to help me, but Pingywin and Bubsey turn out to be good aliens! They rescue me, and teleport me and the other guy to safety. This film has to be the best so far. It's got stunts, and action! That's my kind of thing. Plus, I'm the main character! Filming is over now, and so far, I haven't heard anything about my award.
To read part seven, click here!
Posted by Echo006 at Sunday, February 24, 2013