Club penguin has added a new trailer for the latest game... Pufflescape!

Wow! Have you completed pufflescape?
Posted by Echo006 at Saturday, November 12, 2011 No comments:

This is a message from Billybob:

Since we've launched a new ninja game each year, many of you have been wondering when we will launch Card-Jitsu Snow.

The team is still working hard on creating a great Snow experience, but unfortunately it's not going to be ready for a while. We don't want to launch it until it's the best it can be. So, we've decided to do something different for ninjas this year, and we think you'll love it. There are some BIG surprises in store...

We're releasing a huge new Card-Jitsu Party. For the very first time, we're decorating almost the whole island with a ninja look!
I'll have more info for you soon. In the meantime, here's a sneak peek of the new party:

As always, let us know your thoughts by leaving a comment. We love hearing from you!

Until then... Waddle On!

The picture is of the Plaza! There will be a new play at the stage called "Ancient Shadows"! Could it be to do with the Shadow Ninjas? Time will tell...
Posted by Echo006 at Saturday, November 12, 2011 No comments:

Reviewed By You: Igloo Items

This is a message from Happy77:
Greetings Penguins!

Happy77 here. It's Reviewed by You time again! Last time I asked what your favorite game to play with your puffles was. Ubatha said:

I think my fave game would be either Aqua Grabber or Jet Pack Adventure! Both of those can earn over 300 coins if you play awhile! Then I can get more cute puffles! Thanks to my pink puffle and green puffle for earning extra points! WADDLE ON CP! happy halloween!

Now for our next Reviewed by You... As you know, we just released new igloo and furniture catalogs. It got me thinking... What's your favorite igloo item of all time, and what do you like best about it? Share your thoughts in the comments below!
I'll randomly pick one of your comments to feature on our next Reviewed by You blog post. If your comment is featured, you'll even get a 10,000 coin prize added to your account, too. :)
Waddle On!
-Club Penguin Team
My favourite item would be all of Rockhoppers rare items, as they only come around every few months. ツ
Posted by Echo006 at Thursday, November 10, 2011 1 comment:

I was practising my soccer skills in my igloo when I recieved a new message! 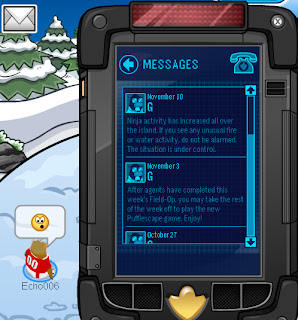 Ninja activity has increased all over the island. If you see any unusual fire or water activity, do not be alarmed. The situation is under control.

Wow! Non-Members will become ninjas too, I guess this is why.

The latest issue of the Club Penguin Times is out now! Here are the headlines 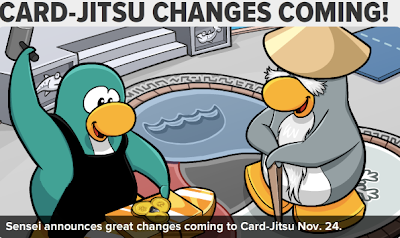 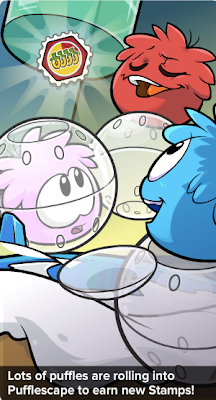 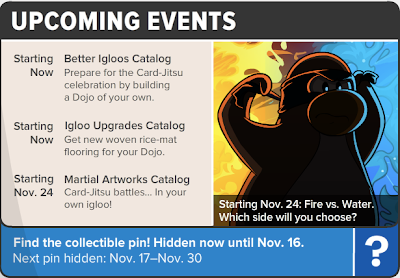 Have you read the newspaper? I can't wait for the changes!
Posted by Echo006 at Thursday, November 10, 2011 No comments:

There is a new Field-Op available!
Here it is at the Pet Shop!

Power up the chipset. Can you complete the puzzle? 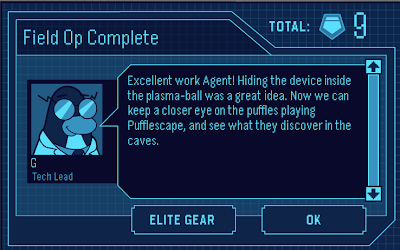 This is a message from Happy77:


Happy77 here. What do you think of the new game, Pufflescape? I've heard that some of you have earned a ton of coins playing it. Sounds like a great way to save up for some new igloo accessories...
This week we're launching new issues of Better Igloos and Igloo Upgrades. Here's a sneak peek of the new furniture catalog:

What do you think the new items are? Leave your best guesses in the comments! :)
Waddle On!
-Club Penguin Team
The new igloo items will look AWESOME!
Posted by Echo006 at Thursday, November 10, 2011 No comments:

The penguins have drawn lots of pictures! Lets take a look...

Then we saw the Pet Shop and whats underneath it!

Then they dressed up in the latest clothes from the Penguin Style.

The pink penguin got upset!

Waddle around and meet new friends!

The penguins talked to each other.

As the puffles continued with their new rock band!

This drawing is fabulous but is not new! BUG

Penguins Around The World

The puffles decided to play Card-Jitsu!

Then they started a band! Awesome!

Its nearly time for Christmas! So the penguins dressed as trees.

Then they waddled to the Ski Village.

Then the Ninja showed us his ball from 2006 before we knew they existed!

Many of you know that you can unlock items online buy buying a Club Penguin Toy. If you do this you will get some items from the treasure book of your choice. This treasure book is series 14. You can no longer get other series. 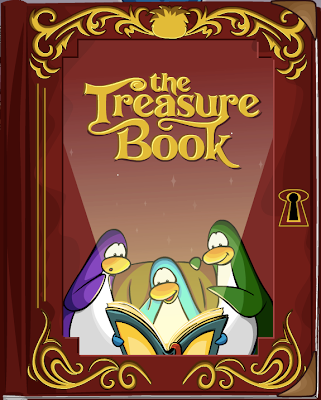 There is loads of stuff to get!

Many of you know, puffles now have hats! You can also get three rare hats by buying a plush!

Wow! Have you got a puffle hat yet? I have also found some exclusives!

And some of these hats aren't out too! 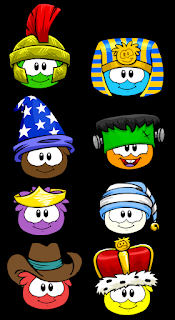 Rockhopper's flowerplants are blooming once again! Hurray! They look awesome. 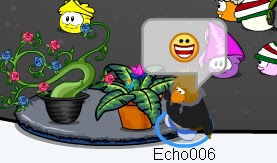 I must water them quickly! Hopefully, they will grow and grow and grow.
Posted by Echo006 at Sunday, November 06, 2011 No comments:
Newer Posts Older Posts Home
Subscribe to: Posts (Atom)