What is to become of the hideout?

Polo Field has spoken the truth. The secret is out. No longer will there be a hideout. Ninjas do not require a hideout, as the dojo and the hideout will combine to make one ultimate dojo.
And here's the proof. First up, we've got Ninja's proof. If you look closely at the background, yoou'll see there's no hideout. The puffle statues have grown older, and there is a bridge from the dojo to the mountain where the Snow Dojo will be. The waterfall has been moved slightly closer to the Dojo. Inside the Dojo, there will most likely be three doors. One to the fire dojo, the other to the water dojo and the last to the new snow dojo.


Greetings, Sensei. I shall train with much diligence. twitter.com/ninjachat3/sta…
— Ninja (@ninjachat3) May 17, 2013


If you're not completely sure about this, Polo Field will tell you it's true! At Field Friday Polo Field let the secret out, and told everyone in the room! Luckily, Andy caught a screenshot of this before it disappeared! So, here's more proof. 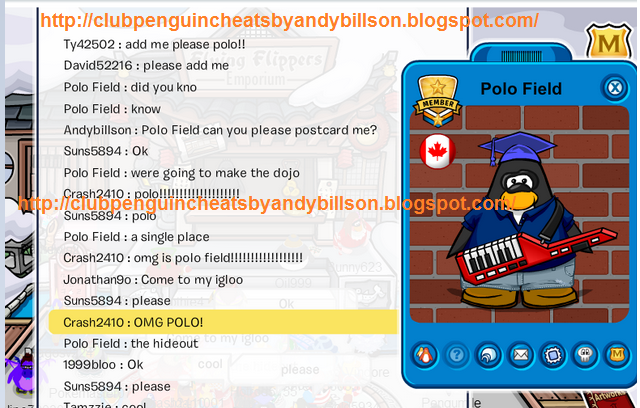 So, the dojo will be one giant dojo? It's a shame that we're going to loose the hideout. I like that room, but I guess this is the next step in our ninja journey. Thanks again Andybillson, Polo Field and Ninja (@ninjachat3 on twitter) for the photos above ;)
Do not fear, grasshopper. The snowmen are coming, and we must face them sooner or later. To do this, we must upgrade the Dojo.
Posted by Echo006 at Saturday, May 18, 2013 2 comments:

Hey! Did you miss the Marvel Party? Or did you just not bother buying any of the items from the catalog? Well, it doesn't matter because now you can get the Marvel Superhero Items from the catalog, until May 23rd! Be quick, and use this link...
http://play.clubpenguin.com/?rm=851#login/
Once you've logged in, your penguin will arrive in the current party room (the Hero Carrier) and you'll find the catalog in the bottom right hand corner!
I always login to Club Penguin using the link above, so I never miss out on anything :D Yes, I forgot to buy the Marvel Superhero items - but now I've got em all!
Posted by Echo006 at Friday, May 17, 2013 4 comments:

Polo and Daffo are going on a ninja quest! I think that new parts of the episode will be arriving each day :D Stay tuned for the next episode...

Hiya! Daffodaily5 here with your POTD!
Mastering the elements of Card-Jitsu can be a bit tricky. So it's ace to know Glenn44 shares his tips and ninja skills at the Dojo. Sensei would be proud!

Everybody is excited about Card-Jitsu Snow, more than the My Penguin app! No, that's not true. My Penguin is the 5th best free app in the UK currently at this moment! But, the logout screen would like to tell you something... 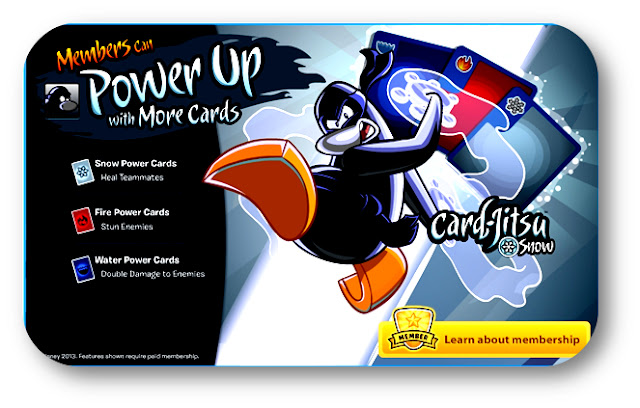 But the logout screen said, MEMBERS can power up with more cards, what about non-members?
Posted by Echo006 at Thursday, May 16, 2013 No comments:

I was in the Hero Carrier, training to become a super hero when a spy phone message arrived! I wonder who it's from... 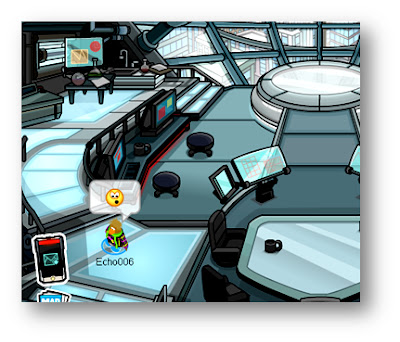 ...Gary! He said some random stuff which I can't understand. 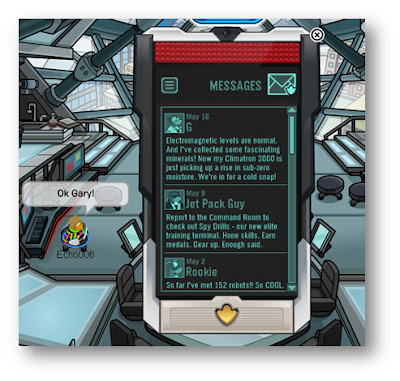 After the blizzards last week, the dojo has been hit by an avalanche! Just like when the Dojo was first dug out, there are masses of snow around the courtyard and the hideout. Sensei has been interviewed, and more answers will be in our weekly news update soon. For now, the dojo courtyard is full of snow, and citizens have been advised not to stand on the snow! 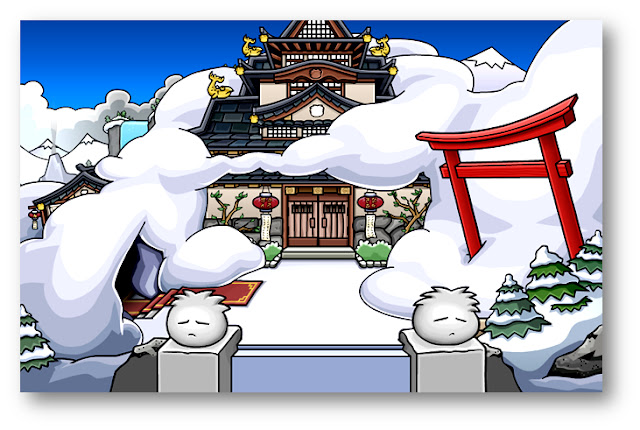 ...If you enter the ninja hideout, more snow has fallen, and if any more comes, the snow will fill up the hideout! Be careful, the snow dojo may arrive soon... 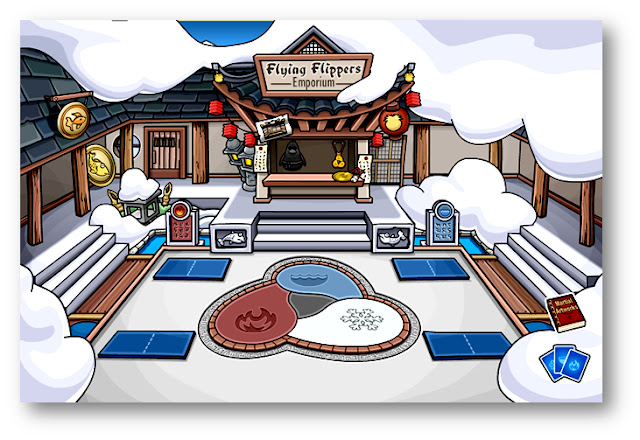 At the Dojo, Sensei has begun construction, but for what? Will the Snow element be here? What's happening? The card-jitsu mats have been moved slightly. 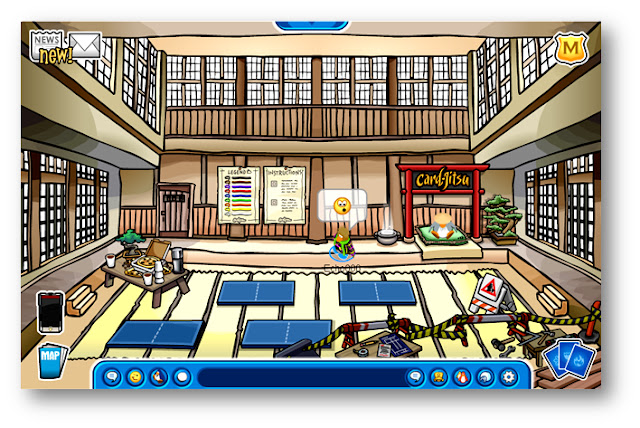 Can you believe it's already May!?!? Well, with each new month comes a new furniture catalog! Let's check out what ninja themed items are available this month... 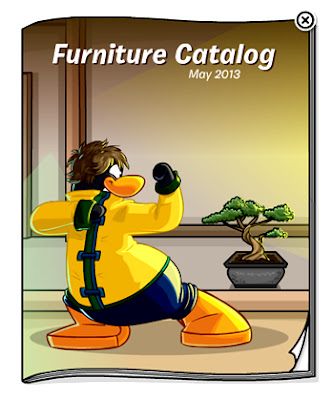 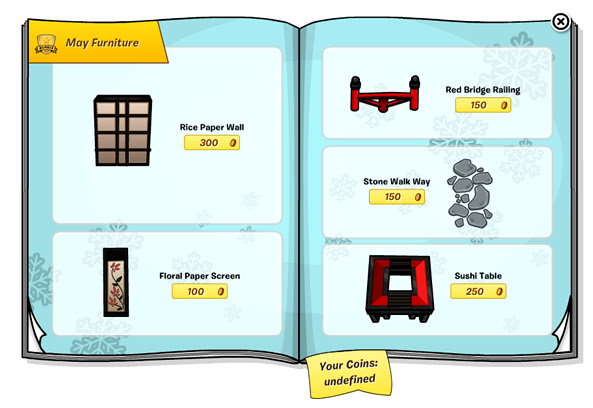 But of course, you're going to need to brighten up the place, so why not with these light up lanterns? They're only 30 coins each! Thats cheap compared to the Ninja Gate at 700 coins! 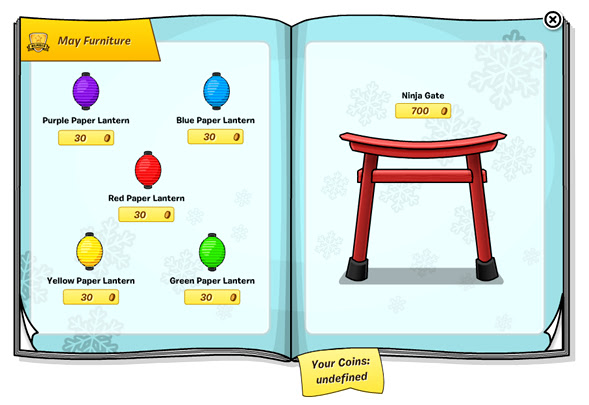 Now we've got some more new items - choose what you want, and get decorating! 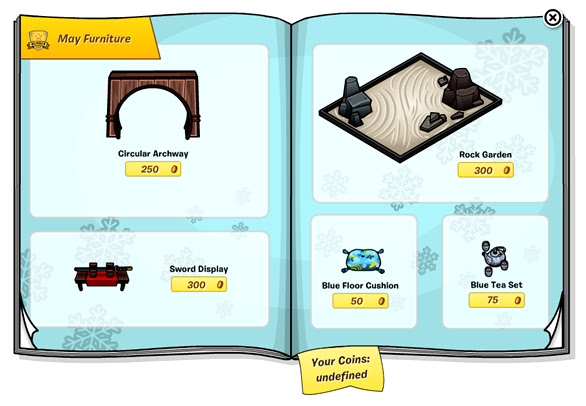 Plus, some old items return - as well as the card-jitsu mat for playing battles in your igloo! 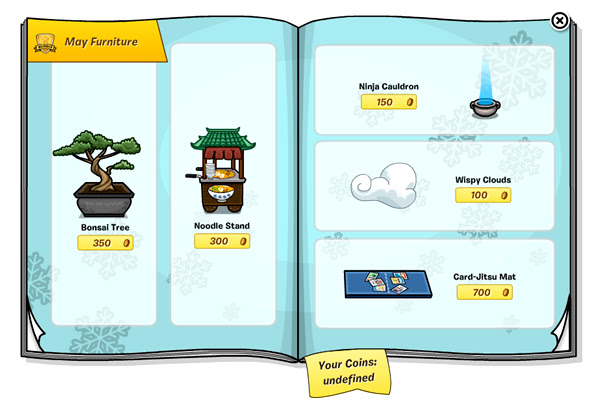 These days don't get much better than this when there's posts on the What's New blog every day! Well, I guess we should've expected this with DaffoDAILY!

This amazing desert island igloo belongs to Funfunny8 who not only hosts amazing igloo parties, but he helps advertise his buddies’ igloos too! How brill is that? Epic igloos are the best!

If you have an epic igloo too then we want to know! Email support@clubpenguin.com!

Hiya!
Today’s POTD is fruit-a-licious Wizzilizzi! She's been encouraging healthy eating online and even had a brill fruit party in her Pineapple iggy… How refreshing!

If you know someone who should be POTD, tell the team via support@clubpenguin.com!
Byeee!
-Club Penguin Team

Hiya!
I'm thinking about hosting a mega epic party this Saturday, at about 4:30am Penguin Standard Time (that's 12:30pm in the UK), but I can't decide what the theme of the party should be (every brill party needs a good theme, right?); can you guys help me out? I also can't decide what server to jump on, so maybe you could help me out with that too...?
Post your ideas in the comments please!
Byeee!
-Club Penguin Team

First up, it's Daffo's next POTD!

Officeman1 has been SO friendly to everyone online – even penguins he doesn’t know! What a brill example to set for new players. Cool shades too ;)

Keep your nominations coming via support@clubpenguin.com.

- Club Penguin Team
Next, it's Polo Field with the Card-Jitsu Trailer!

Hey ninjas!
Earlier this week we announced that the Card-Jitsu Party is coming to the island on May 23! I hope you've all been working on your ninja skills!
So, if you weren't excited enough for this seriously epic party, check out the official trailer below...
Looks pretty, um, cool, right?! Let us know what you think in the comments!

Waddle On, ninjas!
-Club Penguin Team
I can't wait for CJS! Thanks Daffo and Polo for helping me get more sushi by posting more posts ;)
Posted by Echo006 at Wednesday, May 15, 2013 No comments:

﻿This is Club Penguin news. On tonights show, we report that Sensei is missing, club penguin is saved, and ninjas are wanted...
By Aunt Arctic - There are many questions about the mysterious snowfall at the dojo. But Sensei was nowhere to be found. Many penguins suggest that Sensei is training for a new element. Sensei has invited penguins from all over the island, member or no-member, to take part in being a fire and water ninja. Leaflets have been handed out, and ninjas are wanted. Let's go to Echo at the Dojo.
Here at the dojo, many penguins are frightened and worried. Even though Club Penguin is full of snow, there has never actually been a snow storm. Here, puzzled penguins are waiting for an answer, but Sensei has vanished. Penguins are learning the elements, and this snow suggests that snow ninjas may appear in the next month. 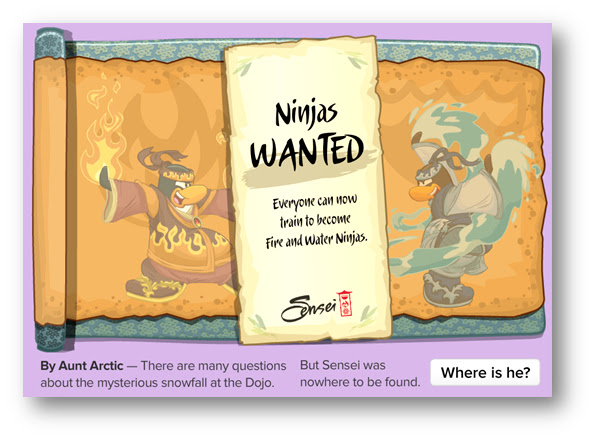 In other news, Club Penguin has been saved by the heroes once again. This is the second time they have defeated the protobot, in a year! A super hero reports.
CLUB PENGUIN IS SAVED! Thanks to all the heroes who helped us defeat those robots! Penguintropolis is ours and free from the grip of evil, AT LAST! The strange crystals that powered our gloves have disappeared, and Gary has taken many to his lab. Or so they say...could the two be connected? The protobot has disappeared, and no more havoc will wreak out, until next year, if the Marvel Superhero Takeover returns. 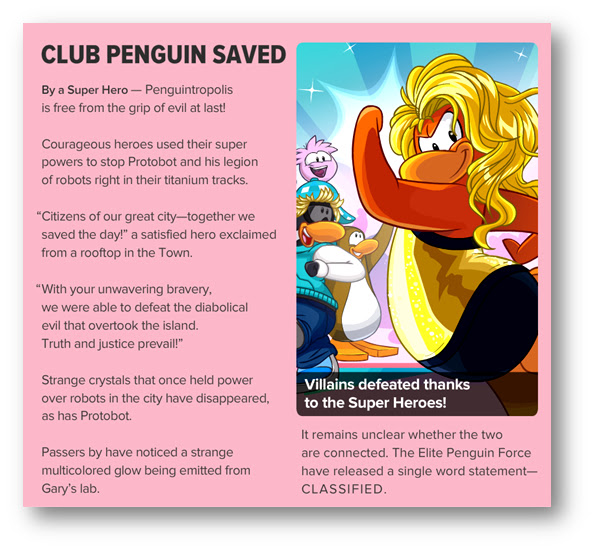 Here's whats coming up:
ON NOW! Penguins at work - show off your sushi skills over at the clothes shop.
NEXT WEEK - Furniture is coming to the catalogs, and it's all ninja decor!
DON'T FORGET - Act at the stage with the battle of the ancient shadows. 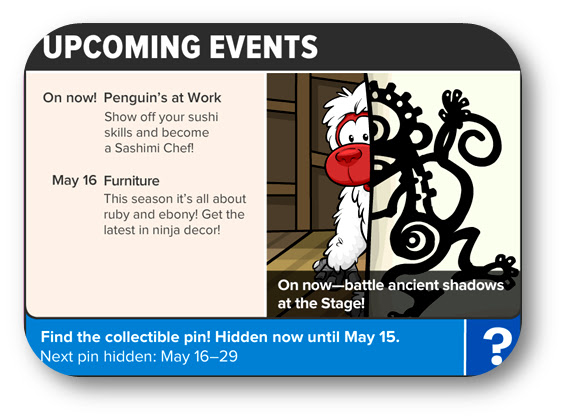 ..To conclude, here's this weeks secrets, written by SENSEI? I thought he was missing! 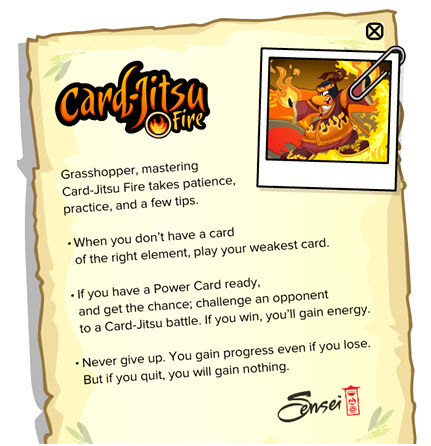 Daffodaily5 has made her first Penguin of the Day post, and Polo Field talks about Spy Drills! They certainly are making ALOT of posts on the what's new blog now! These blog posts used to be rare, two or three per week! Now we get one per day... (It is called Daffo's DAILY post)


Hiya!
As my buddy Polo Field mentioned last week, I’ll be taking over Penguin Of The Day as part of a new series of DAILY posts! So from now on, all nominated POTD’s, Featured Fashions and Igloos will be right here in one place! Let’s get cracking! :D
There’s nothing more heartwarming than a penguin that cares about our planet. Buddyboy699 did a brill job raising awareness for Earth Day by hosting an epic party online! Great job!

Send your POTD nominations to our team via support@clubpenguin.com
Byeee!
-Club Penguin Team
I like the new "POTD" and the fact that everything is going to be in these posts! Thanks Daffo! Now for Polo Field's post. Something I missed out...new spy drills are at the EPF Command Room. I only forgot this because I never check the EPF anymore, because barely anything has happened since November when it was destroyed!

SPECIAL ANNOUNCEMENT FOR AGENTS ONLY. CLASSIFIED INFORMATION BELOW.
Attention agents.
Many of you have visited the new elite agent training terminal in the Command Room - Spy Drills!
Now you can hone your reflexes, practice problem solving, and test your memory before you get out on the field. Because the island needs agents to be ready for whatever's coming next.

When you're ready, take a challenge! You'll earn medals every time you successfully complete one!
Waddle On, agents!
-Club Penguin Team
That's everything from the what's new blog for now - there'll be more posts to come!
Posted by Echo006 at Tuesday, May 14, 2013 No comments:
Newer Posts Older Posts Home
Subscribe to: Posts (Atom)