Superstar ~ On The Red Carpet

To read part one, click here. From that post, you can click on the link at the end of part 1 to be taken to part 2, which takes you to the next part and so on...
25th Feb - I woke up early today. Filming is over now. The director told everybody to meet him at the red
carpet today! At first, I couldn't remember where that was, and then I realised that it was at the stage. If you walk along the red carpet, you can enter the awards show! Was I going to be in it, with all my friends? I snuggled up to my long haired puffles and stroked them. My black puffle growled as the alarm went off. I switched it onto snooze and turned on the TV at the news channel. The reporter stated that the awards show was on now and famous penguins everywhere were lining up on the red carpet to see if they received the golden award. Only few penguins ever got this award, but most always got bronze, and some silver. I decided that I needed to get up, quickly. If I was late for the awards show then I would certainly not get my award. I dreamt for a few seconds then rushed to my wardrobe and put on a tux and my smiley face tie. I got in the limo with my green long haired puffle and found myself at the Plaza... 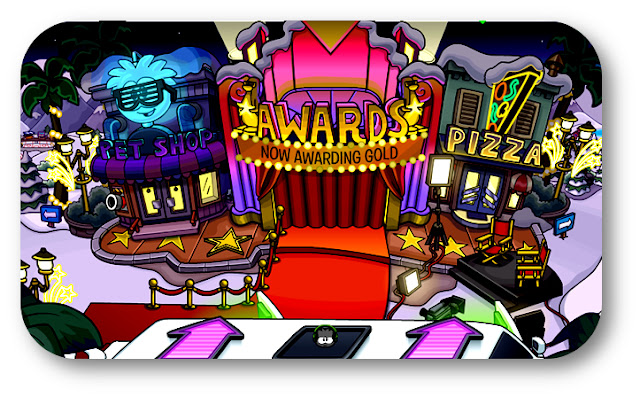 ...Once again staring up at the Awards sign which read "Now Awarding Gold" Penguins were crowding behind the velvet rope, and everybody was asking for autographs. The atmosphere was amazing as all the famous penguins stepped out of the limo and onto the red carpet. I had no idea what was so special about a red carpet. Couldn't it just be a blue one? The awards show was buzzing inside. After I passed the flashing cameras, I found myself face to face with what seemed like a ton of penguins. But not just any old penguins, famous penguins! Everyone was cheering and clapping as others got their awards. It was so amazing! I couldn't believe how many penguins were greeting me as if they had known me since I was born. But when would I get my award? Would I even get one? I found Bubsey Good, Woddylan, Pingywin and Zowey over in a corner, chatting. None of them had got their award yet either. Penguins continued to clap as others kept on getting bronze, and some silver, yet nobody gold. After what seemed like years, they announced that the awards show would continue tomorrow! I was really annoyed, but I still loved being a superstar. Tomorrow was the last day of the Hollywood Party. It was the only day that anyone had ever got gold. I stepped into the limo, once again, and waddled back to my igloo. I sat down with my green long haired puffle, PJ, and gathered them all up for a meeting. I wanted them to be at the awards show when I got my award. I had filmed three different movies, and tomorrow was the day it would all come to an end.
To read part eight, click here!
Posted by Echo006 at Monday, February 25, 2013