To read part one, click here. From that post, you can click on the link at the end of part 1 to be taken to part 2, which takes you to the next part and so on...
20th Feb ~ I've got the part. The movie doesn't start until the 22nd of February, and filming only lasts for about three days. Earlier today, I sat in the limo on the comfortable couch and waited. I did nothing as the driver drove all around Club Penguin, taking different famous penguins to different places. It was wild outside. The Hollywood Party was in full swing, and I've never seen Club Penguin so full! I had a headache, so I tried to sleep for a bit, but I couldn't, not with all the screaming fans. I decide to get into the limo pool. Its warm and very calm. The penguin I'm sitting next to is Cadence! She must be taking a break from filming whatever movie she was currently doing. This limo was only for celebrity penguins who are starring in a film, or have done at the Hollywood Party. You can't just have a part that's only three lines, you've gotta have a big part. Security is tight in the limo, and I couldn't believe that nobody was crowding her in the pool. But that's because celebrities know each other, right? 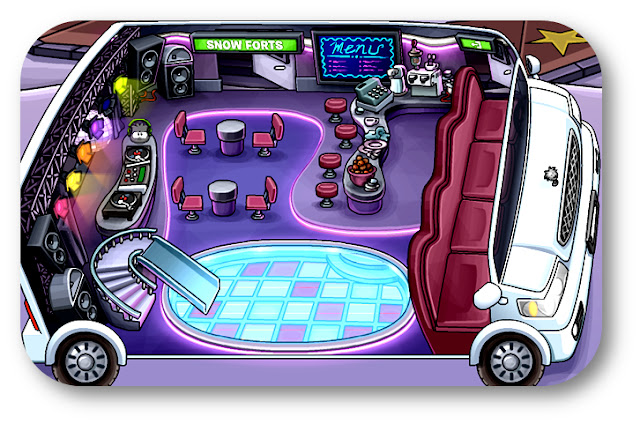 Either way, a penguin slides into the pool and sits next to me. It's just another penguin filming another film. I decided to ask Cadence a question, even though her eyes were closed and she was relaxed.
"Hey Cadence! Have you heard of me?" I said quietly to her. She glances my way, as if hearing her name, and then closes her eyes again. She didn't hear me! I ask her again, this time in my normal voice. She looks up and then stares at me intensly.
"Aren't you that guy who saved the island from utter terror last month?" She asked, surprised.
"Yeah, how did you know?" I reply.
"Oh, I was watching you all the time, like an eagle." The words screamed inside my mind. Eagle. My father's code name when he came to the past with me. I even think Gary set the whole thing up. But that doesn't matter. I think to myself that I need something to remember this moment by.
"Can I have a photo with you, and your autograph, please?" I say, trying not to sound desperate.
"Sure, why not?" She replies with and snaps a photo, and signs a peice of paper on the desk behind her. I turn my head away and stare at the autograph. I close my eyes, deep in thought of what has happened to me over the past few months. The mysterious ninja. The robot. My father. Time travelling. Now this. Becoming a Hollywood Star was awesome. But what would happen when it came to filming?
To read part four, click here!
Posted by Echo006 at Wednesday, February 20, 2013