My favourite mascots on Club Penguin are Rookie, Aunt Arctic and Rockhopper. I have to choose three, no matter what, because it’s really hard to make up my mind between them! I’ll give you my reasons on why I like each of them:
Rockhopper – He’s a likeable character. He is always coming to Club Penguin, even if it isn’t a special occasion. I love how he brings back rare items from his explorations and awesome things like the plants for the Adventure Party. He was the one who created the Fair, which is on my top list of parties! I’ve met Rockhopper, and he’s different. He isn’t just a normal penguin – he’s the one who has the cream soda, stinky cheese, and the red puffles. I love the way he talks, as in a pirate way with “Ahoy” and what not. Also, he’s the first mascot to ever have their own puffle walk with them while running around the island, and I find that especially cool, as well as having a beard and building a whole ship by himself :)
Aunt Arctic – Now I have to describe Aunt Arctic in two different ways: her normal everyday life and her hidden identity. If she wasn’t the director, she’d be a little more peculiar, and she was always giving lots of secrets away in the Club Penguin Times. That’s what I like about her. She is always so secretive about things, yet she manages to give out messages to the EPF through the newspaper! The first time I met her was at the Penguin Play Awards. She was ever so lovely, there wasn’t a crowd, and we gave her tea, and she was so happy and nice. Then I met her again at the Anniversary Party! I met her about 5 times then, and she was always sweet even though there were tons of crowds. The director is different. I always thought of her as a he, obviously we didn’t know who she was back then, but still. I can remember her in the EPF DS Game: I didn’t have a clue where or when she had come from! It was still very cool, getting orders and being praised from a hidden identity. That’s what makes Aunt Arctic so special.
Rookie – Basically, Rookie is stupid. Rookie is the name of a new person who has just joined, however he still has that name today. Is it his real name? What I like about Rookie is the way he acts. He is always pulling jokes and pranks, especially in the old PSA Missions and System Defender! He is always doing things differently to everybody else, and that’s what makes him unique. He isn’t just a normal mascot, who has a specialty like dancing (Cadence), or ninjas (Sensei), or puffles (PH), he is just a normal penguin struggling to get along in the penguin life! He’s the most realistic mascot, even though he acts really stupid and has stupid ideas – but that’s what’s so good about him! 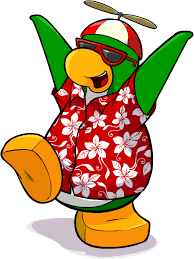