17th Feb ~ It's quarter past seven. I'm so scared. Believe me, you wouldn't want to know what's happened to me before. I'm Echo006, but you can call me Echo. I'm just a normal penguin, you could say, but really, I'm a penguin who's always on the lookout in the face of danger. I've had three missions. On my first one, I saw the Mysterious Ninja, a strange, yet mysterious ninja. Bacially, what the name says. Then I met him again, in the future and the past. That was really confusing! My father disappeared a few years ago, strange at first, but I understand why. He left to get a job over at Penguin City, another island where my friend Bubsey was born. Nice place, actually. Turns out he was just planning to get me back. He worked with me on my third mission when I faced going back in time. I didn't know who he was, but he was in on it with the mysterious ninja - my number one enemy. But I won't be seeing him anymore after he was taken away. He planned to make Club Penguin into a robot, and he did! But I managed to save the day, with the help of a few other penguins. My island has been repaired now, in fact, it's looking better than ever! New rooms, new looks, everybody is changing their styles now! Even the catalogues and newspapers have changed their models, shaping them into coloured humans. Anyway, now I've got a job. I'm starring in a movie. It's called Penguin High 3, but I'm only in one scene. I might even audition for the High Speed Getaway, after I shoot this movie. It's not the same life anymore. Club Penguin has changed, for good. But people who can put up with the changes, are the ones who succeed in life. But I'm really frightened now. I have to get all my lines perfect, although I've only got about three. I'm just a penguin at the school who runs into the star of the movie, and they get cross about it. So far, we've had to do this scene over ten times! But I love it, even if it is as hard as opening a can (which I'm not very good at)! 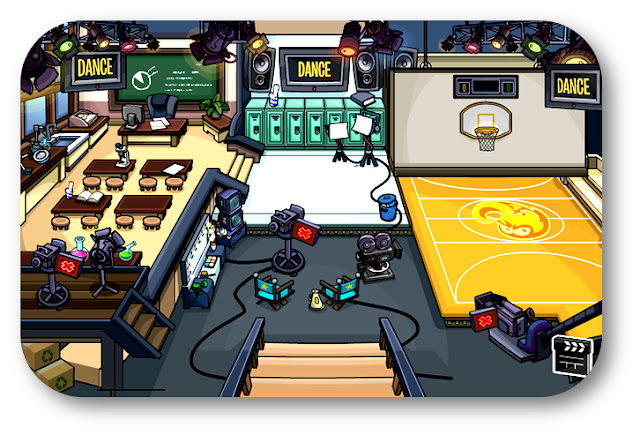 I bump into Zowey (the star of the movie) in the hallway. She's really good at acting, but apparently she hasn't got a lot of experience! I couldn't believe that when I saw her. I've made a few friends on this set. They're called Bubsey and Pingywin. Apparently, they're both secretly EPF agents and they helped to destroy Herbert in Operation: Blackout - whatever that was. I must of missed it when I was visiting my dad in Penguin City. Either way, here I am, day by day filming the scenes over and over again. I hope I've done enough to be popular enough to actually get a good part, in the other movie that penguins are auditioning for! Maybe I won't get it, but secretly, I hate filming Penguin High 3. I really want to do some stunts. Either way, I'm leaving the set after today and the movie should be ready in a few months! The audition is tommorow, I really hope that I can do it!
Click here to view Part 2!
Posted by Echo006 at Sunday, February 17, 2013