January 2010 - The first time we had our expeditions in January. It was unexpected. Nobody had seen it coming. We were all getting on with our every day life when Rockhopper's puffle went missing. That was the worse. Knowing that Club Penguin were serious. Then, it was heard that Yarr had been found in the caves. I can remember on January 22nd or something heading into the caves, ready to take on whatever it was inside. IT WAS AMAZING! I loved that expedition, especially going underwater. The worst part was when we weren't allowed to go back into the caves. Now that made me upest!
February 2010 - The secrets of the Bamboo forest. That was very interesting, searching for the feather. I'd never seen a pin be hidden yet related to a stage play. Strange! When the puffle party began, I was ready. But I wasn't ready for an obstacle course! That was very unexpected, and I loved watching my puffle win every time.
﻿ 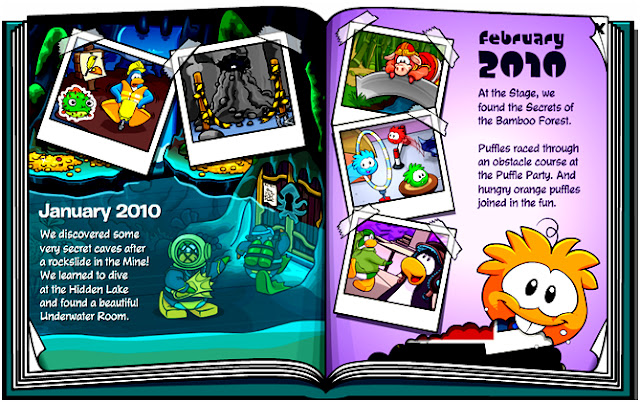 March 2010 - Puffle Rescue. The return of the caves. It wasn't really as good as I thought. I hated Puffle Rescue. I could never get any of the stamps. Atleast the Penguin Play Awards cheered me up. I voted for Quest for the Golden Puffle again and again. It won again. I loved walking down the red carpet! 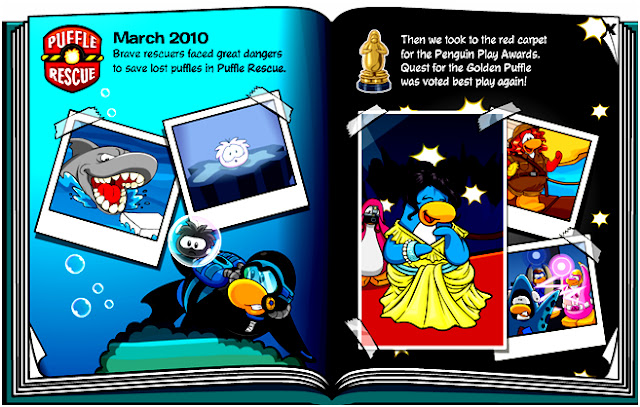 April 2010 - Yet another strange April. But this time it was even better. Club Penguin took away the fools, and added a community garden. That was very disappointing for the Mine, I felt. But it was also very exciting. Atleast fooling penguins wasn't what April was about that year.
May 2010 - The Knight's Quest 2! Not as good as the first, I have to say. But it was much scarier. Even though the dragon was a machine, I still loved pretending to fight it. But then, a new PSA mission arrived. I played it eagerly on the first day, trying to work out what to do and how to get through the deadly corn maze. When I finished it, I was shocked. I had just witnessed the end of the PSA. The PSA had been a whole chunk of my penguin life - taken away from me. And the Sports Shop. Now, it's just a tiny little shop and nobody cares about it. 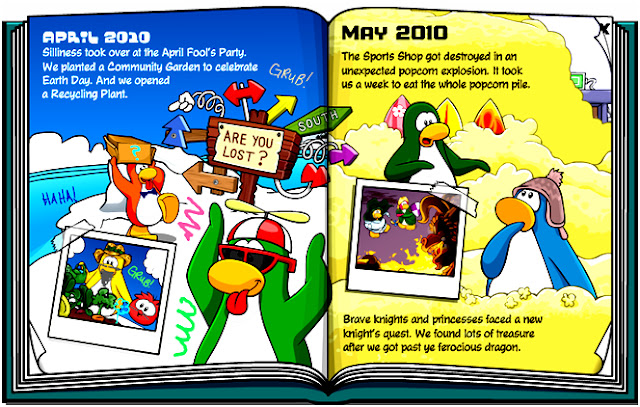