We are so doomed ~ Herbert's Back!

As you may know, Operation Blackout has been planned since 2011 ~ this means that it is going to be one of the best Herbert failures in Club Penguin. Now, there may not be a blackout if the EPF can help it ~ but it's most likely there will be as it is in the name. Herbert's asked Gary something about making a blackout in last week's newspaper (see Boiler Room) and we haven't actually seen him since August 2011. We thought we finally had him, until in January he escaped when the island tipped ~ maybe the glass shattered and he was awoken or Kluzty found his way back and helped Herbert get away. We also know that there has to be a new System Defender level (it says so in Club Penguin's swfs and in our stampbooks) so that may come in November. Now, ninjas are not coming ~ there's going to be no snow ninjas in November but Club Penguin have already planned out the mini-game. So, head over to clubherbert.com (our future home when our island gets destroyed) and check out what he's up to: 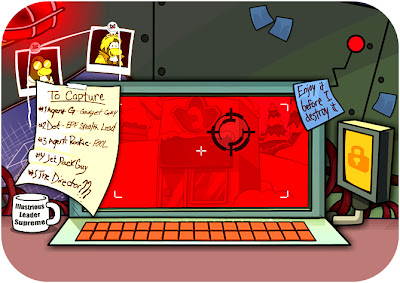 There's quite a lot of sneak peeks around of what Herbert's up to now ~ he's even got his own twitter account! But as we all know, Club Penguin will not be destroyed, the EPF will win very slightly missing their deaths like the Popcorn Incident and then we will all live happily ever after and all the rooms will be redesigned for a new modern look :) Wonderful! Can't wait to find out if that actually does happen, Herbert will even be waddling around Club Penguin (By waddling, I mean whatever Polar Bears do)
Posted by Echo006 at Friday, October 26, 2012