We all know it's coming ~ and we have done for a while. In case you didn't know, a Club Penguin generation (created by Lebron Jr) is four years or so of Club Penguin. You know, your mum is from the older generation ~ and we're all the new generation ~ the children of the world. Well, think about it ~ Generation 1 ended in 2007 (or somewhere around that time) and ever since then we've had generation 2. Now, generation 2 is coming to an end. It's so sad to see this happen as I grew up in generation 2, but it's great to look to the future. So ~ want to take a peek at what's instore for generation 3? If you don't look away! In the new horizons video, at the end in only one second a series of pictures came up. You've gotta be real fast to catch even a glimpse of them. It's helpful to use the pause button :) We've known this generation has been coming because some of the rooms have already been re-decorated ~ but none of the outside rooms which I have stated before.Take a look at the Gift Shop. It's called the Clothes Shop in the future, and its way more up to date then Screenhog's artwork. Check out the cabinet over there ~ it'd be great if we were allowed to have those items :) 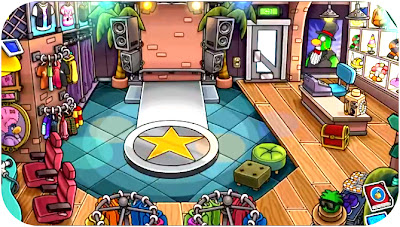 ...Rooms like the dock are really basic and have almost nothing in them. The dock is always a great hangout and it still will be, but with a little extra details like benchs, trees that look like cardboard cut-outs, more mountains and distant things. The hydro hopper has been shoved in the corner ~ that's very good and there's still lots of open space to play in. I'm liking the new rooms so far... 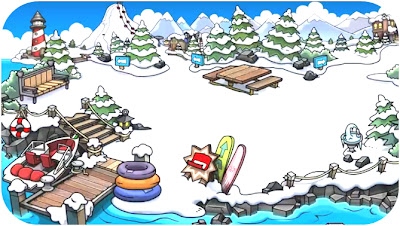 ...and this makes it even better! The Pizza Parlor finally has more places to sit at. There are now booths and the counter is way more organised. There's doors to the kitchen (Pizzatron 3000) and the piano has been updated. Great! This looks just like a modern day restraunt or takeaway place with seating :) 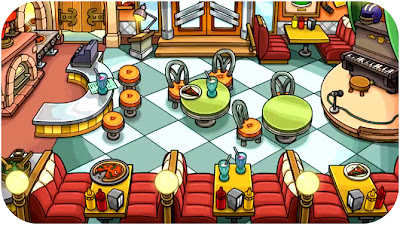 As I've been asking about, the Club Penguin Town has now been straightened up. Previously (or should I say, now) the Coffee Shop and the Gift Shop are slanted. I don't like that ~ but now they are way more modern and the doors actually look the same on the inside! How wonderful is that? Even the Coffee Shop window does too :) Plus, a new room will come just before the Town ~ that's why there's pavement. If you haven't seen that sneak peek, it's been around in the Epic Official Guide for a while now. This room contains a fountain, a tour guide place instead of at the Ski Village, and a welcome room (Could this replace the welcome room now? 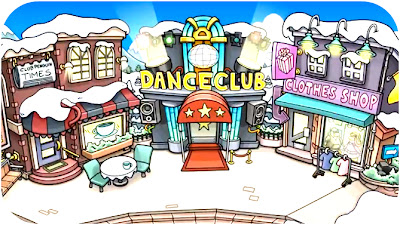 Same goes for the Plaza. Finally, the Pet Shop doors are now doubled like on the inside ~ but will Club Penguin change the Stage's doors? They're going to have to otherwise it will be the odd one out and they'll have to add the ticket booth in too :) The stage hopefully will have seating so we can actually watch the performance and there better be some new plays instead of those boring old ones that I've seen a billion times. 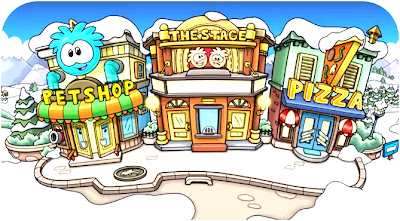 ...The beach is way more likeable. There's a bridge to cross to get the Dock, and the seats are obviously way more comfortable. The lighthouse looks cooler ~ that room has to change too! In the distance, you can see the mountain ~ it looks very steep and there's way more seats on the ski lift. 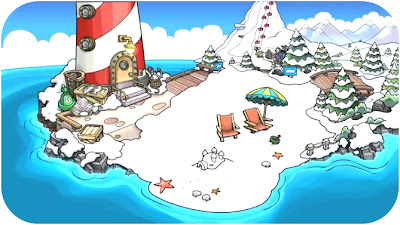 The Snow Forts is now ready for real battle. You can duck under the walls and peer through the windows, and even make a snowman. The Clock Tower is way neater and there's a long pathway up to the Stadium! 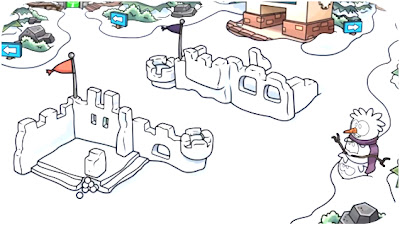 That's all of the rooms we know about so far ~ this is going to most likely take place soon (maybe when the blackout comes???) and it should happen at the same time. If not, it'd look unrealistic with modern rooms and old rooms :) Ready for Generation 3? Bring it on ~ bye generation 2!!!
Posted by Echo006 at Thursday, October 25, 2012