Now, the moment you've all been waiting for, the new yearbook has arrived! It's totally lame as I can remember everything that happened in far more detail in my head. It feels like yestarday ~ but if you're old and you've forgotten then why not read it to reboot your systems? Yes, in fact, they've now got two pages for ALL the months ~ on the other yearbooks some only had a single page. Scroll over different things on each page to find hidden secrets and click something on the page to find the hidden pin of the month :)  Notice that the picture on the cover, is the same on the yearbook cards sold in the UK. 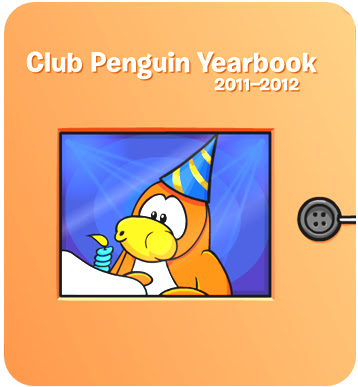 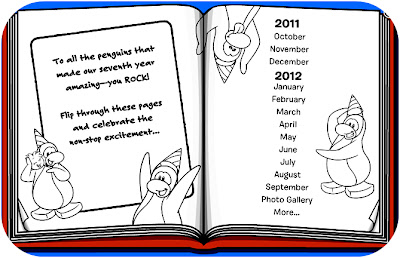 Let's see. Wow, October was horrible. There were ghosts and the party hat looked horrible ~ but on the bright side, I began blogging about Club Penguin! Click on the green ghost to find the Crystal Ball. 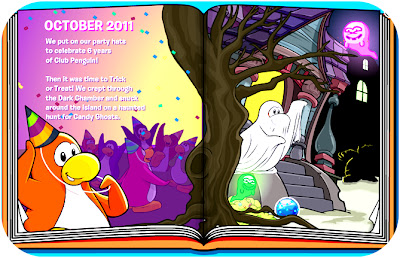 ...November was a little different. Many thought that Card-Jitsu Snow would come, but it didn't! Instead, non-members had a chance to become a fire and a water ninja while members battled it out! Click on the Water Ninja's eyes to find the Blue Koi Fish. I remember that I made a fact file about koi fishes ;) 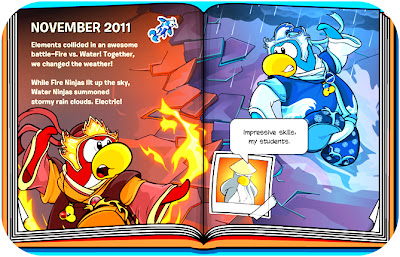 December was brilliant. We helped real people in need with coins from our accounts! How does that work? Well, you simply click on a button and then you have helped towards caring for others ~ isn't the internet great? We each found our 12 gifts (and some changed the date on their computers to get all the items before everyone else ~ remember tricks like that for this year!) We said goodbye to 2011 and welcomed an even year where England would hold the Olympics. Click on the star of the Christmas Tree to uncover the Reindeer Pin usually found at Santa's Grotto and in our igloos ~ if you have the item. 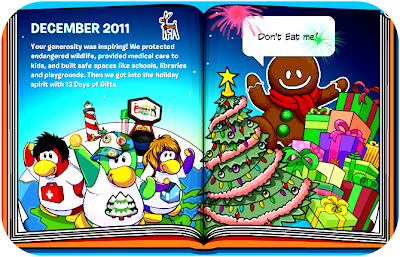 ...Our 2012 got off to a great start! Yes, Rookie tipped the island and we almost sunk ~ but we went futher and explored a maze ~ yes, I did get lost but once I found my way around it was awesome! Click on that pesky pink puffle to uncover a shell pin! What type of shell is it? Anyway, Rookie or somebody fixed the island and while all that happened Herbert escaped from our hibernation plan. 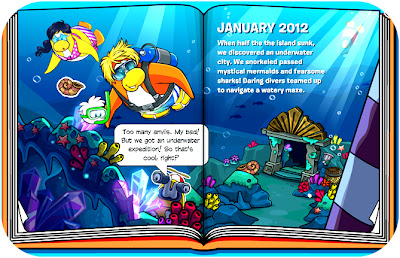 February was lovely. I remember having a super time at the Fashion Show, judging the costumes and walking down the catwalk. Then I set sail for an adventure with Rockhopper. It was good to discover three other different islands ~ I'd never been away from Club Penguin before. Click on the fashion girl's glasses to find the camera pin ~ you may see some penguins wearing cameras that flash! I've got one of those ;) 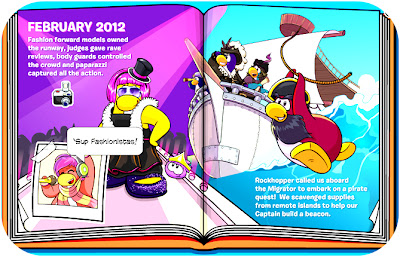 ...March became the Puffle Month. The month where we celebrate our furry little friends. Yes, but for the first time ever ~ Club Penguin was renamed! It was called Club Puffle instead since we could TRANSFORM into puffles! We haven't done that since CPIP in April 2008 :) Now we're transforming into ghosts ~ who knows what we'll transform into next year! Pop the giant puffle's balloon (who is in the Puffle Play Zone but shouldn't be as he is really a penguin ~ but we did this by using a glitch :) Do you remember?) And then discover the cake pin ~ tastes quite good on my playercard. 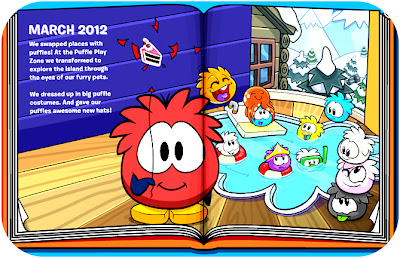 ...April brings another adventure from Rookie. Yes, we couldn't resist so he opened all the dimensions once again and we explored where Orange Puffles came from. Yes, I remember the day when I first spotted an orange puffle. I was many of the first penguins to see this. I'm always like that ~ I was one of the first to spot the blue crab at the cove. I also was one of the first to spot the Time Trekker in the telescope. Yes, now stop boasting. So, we discovered that orange puffles were pretty :) Click on the pink button to find the egg basket. No easter scavenger hunt :( That was very disappointing. 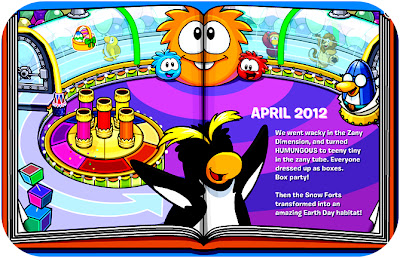 May came another adventure. A giant dragon found our island and decided to take it as his own. He stole the Sky Kingdom and we had to get it back (It was never on the island before, but lets just play along.) We killed the dragon named Scorn, grabbed a statue to place in our igloo for history and then ran away. What a victory! Rainbows were shining, though no sun shone and no rain rained :) Click on the slingshot to discover the knight's pin! 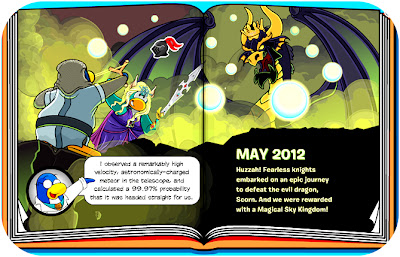 And now we come to June ~ the month where third party advertising was introduced. In fact, look at the bottom of the yearbook and you'll see that it has been trademarked by Marvel! The protobot made a sneaky return as a robot and built a giant one that ran through the city. Heroes or Villains or Citizens? This was a war zone. Click on the Giant Robot to find the Super Villain Pin! 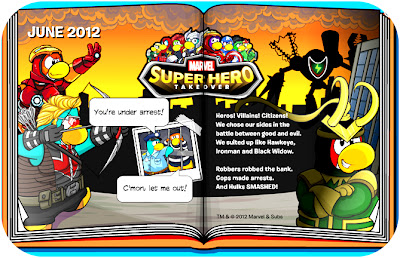 ...Now more Disney products come to Club Penguin. Two very stylish girls who are very good at dancing! It's Rocky and CeCe come to talk to us on Club Penguin. Don't know how they turned into penguins but go with it. Cadence introduced her first song ever. Yes, she's been around for such a long time but she only just got her iTunes up and running! The Party Starts Now it was called. We celebrated with the Ultimate Jam of music and jammed out with Rocky and CeCe. We climbed onto their V.I.P chairs by using another glitch! Click Cadence's headphones to see her puffle bouncing around to reveal the Dubstep Puffle! 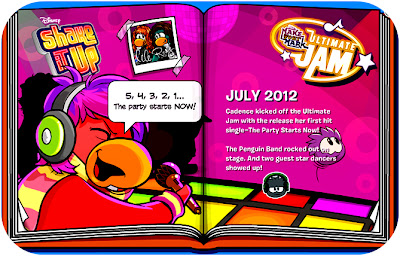 August came another surprise. Rockhopper returned with a giant totem that turned the island into a fruity place and we ate Innocent Smothies! Great, more third party advertising! Even our brand new game Smoothie Smash had advertising in it as we were making the smoothies for Innocent :) Oh well, atleast we had a little bit of fun. Click on the bannana in smoothie smash to reveal the bannana peel. 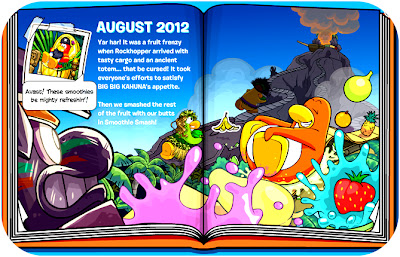 September came the Fair. The annual event usually hosted by Rockhopper ~ yet Rookie returned again with a shocking surprise. He didn't mess up anything! Well, he was going to but the EPF helped him by sorting out little things that could of caused a whole explosion of the island. But we don't need to go into details. Click on Rookie's Balloon to find his ice cream :) 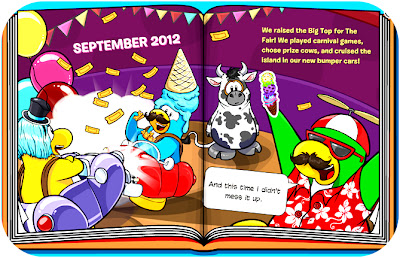 ...Here is the page where you can find out who is most likely to be what. And if you haven't seen the mascot's signatures, then look here! You've got them all for free. 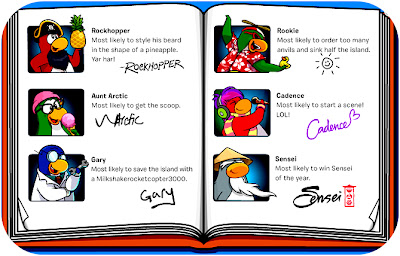 Met the Penguin Band yet? Know what they're most likely to do? Make a song of course ~ hence the name band. Dot really had nothing to do with Club Penguin this year ~ that's why she's got a pumpkin on her head and nobody really knows her except penguins in the EPF (everybody!) No, that's the wrong reason. You haven't seen her, because she's always wearing disguises. But that's not a very good one, a pumpkin. 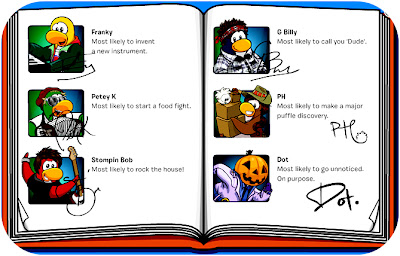 Now, if you scroll over unnoticed you will find the Director! He is anonymous ~ could he be Dot? Fun Fact: In the French Yearbook, when you scroll over the word camoflauge, the Director's message will be slightly to the left because ~ In the English book, unnoticed is in the same place as anonymous and in the french book, camoflauge is in the same place as the other word :) Nice little details. 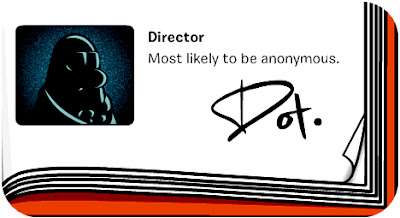 That's everything for that year. See you again in another year to find more memories :) Hmm, November will be a hard year to write about ~ because it's going to be pitch black.