The Dark Night: What Should I Do ~ Part 4

If you haven't read the story so far, you'll need to click here to view the first part and to view the second part click here. Also, to read the third part, click here! Now, I was in the year 2008 until I slipped in time to the future (or present day?) which is 2012! Now, I'm lost, the Halloween Party is about to arrive and Herbert's going to do something terrible named Operation Blackout. He's going to go higher then the lighthouse bulb ~ something that could destory CP forever!
I'm scared. I'm alone. It's horrible not knowing what to do. I could change the whole future of Club Penguin by doing one simple thing ~ but I don't. I can't. What am I meant to do? I've gotta find that guy who came to me (but he is surely in the future, since he told me about Herbert's Plans ~ that are happening SOON!) I've got to find that guy, but I don't know where to start. The island's changed lots. Pet Shop's redecorated, the underground's been extended, there's ninjas everywhere! Boy, if this is what the future is like I'm gonna hate it. Puffles have hats ~ that's awesome but it won't be for very long. Herbert's gonna wreck this town badly. There's no PSA ~ I've still got my old Spy Phone but all I find is this phoning place. Great. I stand alone. Nobody to help me. Nothing to do. I'm doomed, as is everyone else. Halloween Party is on. It's epic and there's loads of ghosts around. I'm in a haunted mansion, looking through a cool device called a telescope (Hey, I'm not that old!) and I see something flash. It's the future again.
Maybe it's the guy from the future heading to the past to tell me to stop the future? Great, I'm totally puzzled and I got no idea what to do. I can't get to that time thingy, because it's not here, it's somewhere else in time. I only see it for a second. Then it's gone. Stuck. Maybe I could ask Gary for some help ~ I've seen him in the newspaper. He answered a question to a guy called Hubert. Penguin ~ I know it's Herbert. I'd wish I could tell him ~ but I can't mess with time. Times too big and I could kill everyone on earth. This is why time travelling is impossible! But not here, not now. 10 Minutes Later... Now I'm a ghost. If you want to catch up on what just happened ~ look at the photos below. I've got myself all in a mix in this halloween party. I told ya ~ Halloween ruins your life. 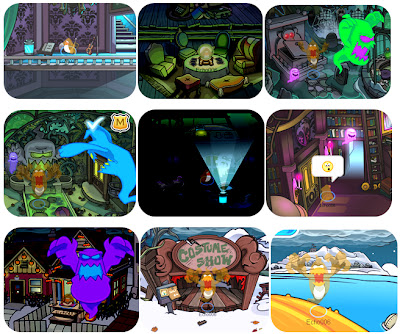 ...Right, now I'm a ghost, I have different abilities such as flying instead of waddling :) That's gotta be good ~ it's far quicker. Maybe I could fly up to that time machine and grab it. But no ~ I don't have time before another terrible event happens. A ninjas swoops by, grabs me by the neck and we're gone. He must have some teleport device because nobody can move like that. Turns out I'm not a ghost anymore ~ must've clicked a button on my playercard by accident. He puts me down. I turn, and he's gone. Penguins like that are so rude. 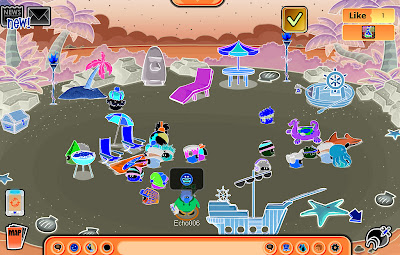 Find myself on a beach ~ with puffles. See a spy phone in the far corner, and a map. That's useful. I've got a newspaper and a mailbox. Got fishes. Got a ship. Got one like ~ couldn't have a worry in the world.
Posted by Echo006 at Monday, October 22, 2012