Before you read this post, go to the entrance of the Ghost Lab. Don't go in it. Instead, move right up the steps to the attic in the haunted mansion. Now click on the gigantic telescope. Wait for about 30 seconds or so; you will see a machine fly through the air into a portal. This is the time trekker, but how did it get there? Who is in it? Where did it come from? Wait for about 10 seconds at the start and a bat will appear. At this point, you'd think it's boring and leave. Wait again. Soon, a mysterious object will fly through the sky. It's the time trekker.
Well, I bet you're all wandering about that post I made earlier in the month, about Gary's Time Trekker. Click here to view the awesome post. Trainman1405 found the sneak peeks :) Well, have any of you seen this? I think this is the machine that causes us to lose track of time and when we're back ~ Herbert's totally destroyed everything. Well ~ that's gotta be in November, right? Herbert said so on his twitter account @herbertcp and he's got his own website clubherbert.com You haven't seen this yet? No ~ Gary's well, what should we say. He's talking to his uncle and they're making a plan. They want to change the past? They want to go to the future? Something using time devices. He's got the Snow Trekker. Remember that? Well, it was in the DS Game and the PSA missions. He transforms this into a time machine. Gary's gotta to be there ~ we know so. End of Halloween Party? It's going to be November. We go back in time. Change something. Herbert destroys Club Penguin while we're gone? Or we kill the EPF so nobody can stop him. He's got his own plans, and we're falling straight into his trap. It's gotta be. Now, don't believe me? Fine. Take a look for yourself. Here's how...

Thanks Icequiz for the picture above. Read the older post for what's going to happen. Here's another idea: this happens in January (the usual expedition month where something unexpected happens) and it's just for fun. Could be. There's a good chance of that. But why would Club Penguin give it away so soon if it was going to be in January. They've given it away. ﻿If you read the instructions at the top of the post, you'd know what I mean. But penguins might just ignore it and think it's just a flying thing in the sky. There's also Herbert to think about. We have no idea what he's up to. He could use the trekker to go back in time and stop the sun or something really bright? It's called Operation Blackout, but how would he know about the trekker? Gary has built it himself. So, spread the word (I'm sure it'll soon get round and everybody'll know) Go on, tell everyone! Look at it in action ~ make sure to credit me and be super quick to snap your photo of it. 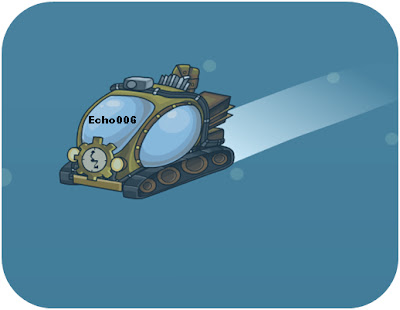 
And so we will find out in January, when we head back to Prehistoric times. Become dinosaurs, everything you could imagine. The Time Trekker you just saw was us in the future, going back in time. Because it couldn't of been in the past, it had to be in the future. WHAM!
Posted by Echo006 at Sunday, October 21, 2012