Recently, I discovered that Pingu Pingey (an old friend of mine) started his blog back up again! The way I found that out was by meeting him on Club Penguin. Today, we played tons of different games. Firstly, I started by showing him the cool mascot trick where they appear in your igloos. Then, we played Card-Jitsu! I won all the time, and won again in Card-Jitsu Fire. Sadly, my computer is very slow and when we played Card-Jitsu Water, the game had already started by the time it had loaded for me. 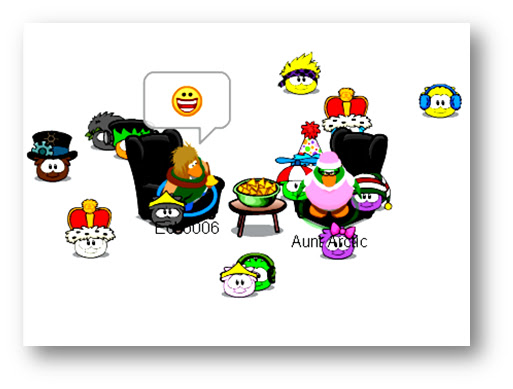 So, Pingu Pingey kept on winning until eventually, my computer started to load faster and I won, once! Next, we played mancala and find four and I told Pingu Pingey how to move when playing manacala (by clicking your postcard, then moving) and we sat making newspapers, playing the game. Find Four was awesome, and we also played Dance Contest, which he won again. Last, but not least, we played Sled Racing at the top of the Ski Hill. Then, we discovered that we had played all the multiplayer games possible, so he decided to work on his site, and I posted this :)