This week's Club Penguin news is BIG! Let's start over at the Puffle Party. The Play Zone (where you can transform into your own puffles) is located at the Ski Village! I can't wait to turn into my rainbow puffle :) Next, there's three brand new rooms added to Club Penguin at the Plaza - The Puffle Hotel! There's an elevator (not a room), a spa and gym (both together in one room), the lobby, and of course - the roof. The Cloud Forest will appear after you have completed all 4 quests to get the rainbow puffle and become a puffle expert. More importantly, here's the news of my penguin: I decided to return 10 of my puffles (whose names were the same as their colour) and change a few names of my other puffles. It was becoming too many to look after, and they were slowing me down in my igloo! I had some more fun with Pingu Pingey, and he adopted a brown puffle! Plus, my red puffle magically disappeared when I adopted a new brown puffle (called Chocolate) and I got really worried! But when I logged back on, he was there :) 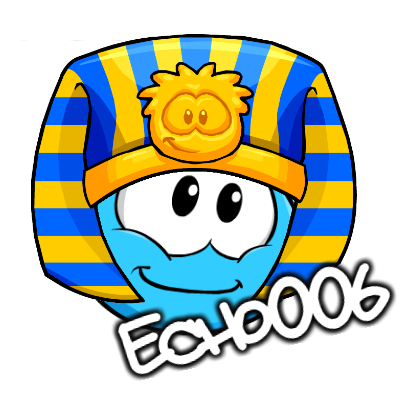 ...I've got 5 unlockable wigs at the moment too, one which you can see above ;) Here's the blog news: nothing much has really been happening. Things are going pretty smooth. The stats are raising higher than ever before, and hopefully we'll beat the score of 6,000 last March 2011. You most likely know, I'm going on holiday on April 1st (NOT AN APRIL FOOLS JOKE!!!) and Penguiin23 will be taking over my place. Remember to give him a virtual high-five or something, because he makes this fabulous blog what it is. Without him, it would just be a plain and simple everyday Club Penguin blog - but it's not :P
Posted by Echo006 at Thursday, March 21, 2013