The Secrets Of The Wilderness ~ The Puffle Hotel

Quickly, the rainbow puffles managed to bounce up and down, alerting us of something nearby. We were close to the back of the Plaza by now, and we had come a long way! Polo Field told us that we should see what the puffles did and then follow them. Cliky Minty was the first to go with them, as they liked her more. Perapin followed, and then the rest of us. As team leader, I made sure that nobody was about in the Plaza. When we got there, we were amazed at what we saw! The Plaza was decorated with puffles and everything - but non of the rainbow sort. As I looked up, I found myself staring at a Puffle Hotel! 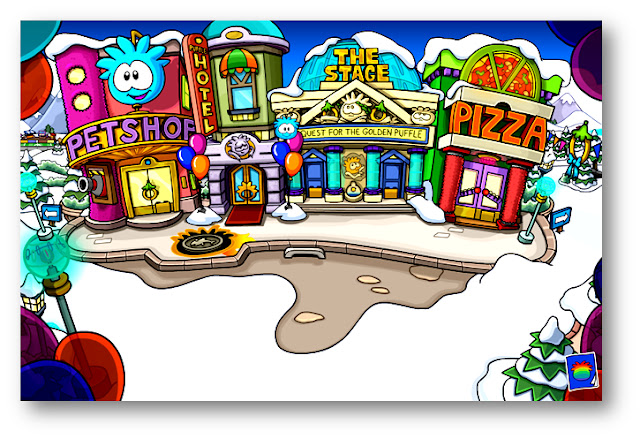 ﻿...The rainbow puffles were gesturing us to follow.
"I think they want to go inside that Puffle Hotel," whispered Perapin.
"You're right," said Brownie, "Let's follow them!
The team moved quietly and quickly like ninjas. Polo Field smiled and I knew what he was up to. He wanted to go up in the elevator! We all got in, and then pressed the top floor button. It seemed to be where the puffles wanted us to go. When we got there, we found ourselves surrounded by clouds! We were on the roof of the Puffle Hotel! Yet the puffles seemed to be waddling slowly towards the...clouds? Was this really there natural habitat?
"They want us to walk in the clouds!" exclaimed Airplane.
"Well, penguins can't fly, so I don't think we'll be heading in that direction," said Pen Que.
"Look! A rainbow! It's so beautiful!" shouted Polo Field
"I wonder where it leads to..." I replied softly following the rainbow.
Posted by Echo006 at Friday, March 22, 2013