Click here to view "My Penguin" which tells you all about my beginning.
May 2008 - My first party. Probably the reason why I like the Medieval party so much! Back then, it was really simple. I grabbed two of my rarest free items (The wizard's hat at the Lighthouse, and the Squire Tunic located at the Dock) Then there was the treetop forts, (one of my favourite party rooms) which is always still located at the Forest each year. I can remember the Switchbox 3000 being at the Mine, and you could control the dragon! That's pretty much all there was at the party, and you can see why I didn't have a membership... 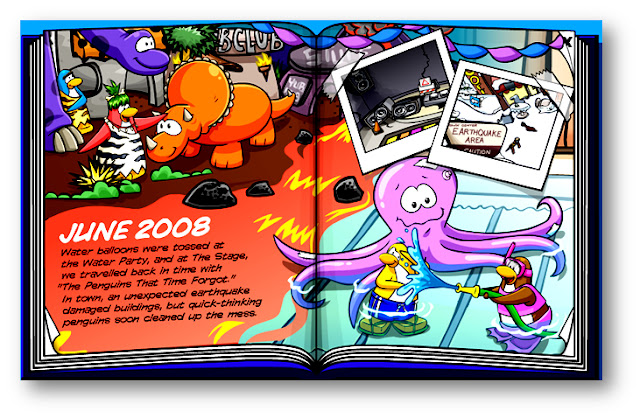 June 2008 - Second party, first mission. I think you had to be about 30 days to become a PSA agent. Back then, the rules were different. I joined the PSA and completed the missions. They were really hard - I couldn't read as fast, and my sister ended up helping me with most of them. Then, my first new mission when Herbert created the earthquakes! ﻿That was great fun :) Then, I had fun in the water party and splashed about. That was also one of the best parties around, for me at least.
July 2008 - Third party, first membership. Yes, I got my membership in July 2008. It was brilliant being a member! But Club Penguin hadn't got all of this transforming stuff, and all these game levels, so it wasn't as much as a privilege to have one back then. I get my first t-shirts at the Music Jam. They were pretty simple, grey with Music Jam written on the front, and other music jam t-shirts. I can remember receiving my free blue bag that you can see the penguin wearing below. It was when we first got our Penguin Mail. I also started to decorate my igloo for the first time, baring in mind that I didn't have hardly any as much coins as I do now. That's because Club Penguin didn't have as much games, or stamps that double your coins. 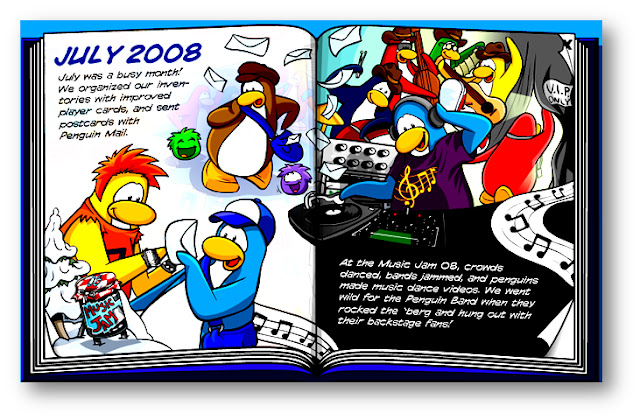 August 2008 - Fourth party, first medal! The Olympics that year were held in Beijing. So, Club Penguin decided to have a triathlon, in the Penguin games! With this, you could receive a medal. I can remember you had to go all around the island, but I couldn't do it :) It was most likely really simple, but my sister ended up doing it for me. Remember, I was still learning about CP back then. I even got a ship igloo, however we couldn't save three igloos and I ended up changing it soon after. I can remember that I spent thousands of coins changing my igloo each week!
September 2008 - My first fair, Club Penguin's second fair. It was brilliant! I got some rare prizes, which now currently are not rare apart from the Tiara and the giant glasses (which don't look cool, by the way) I played my first fair games, and got loads of prizes! I can remember getting the candy apple, the lollipop, the teddy bear and the ping pong paddle. So many free things that didn't cost coins, but tickets! 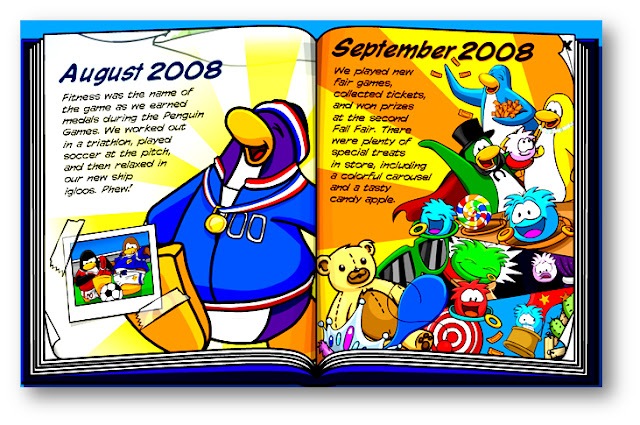