Herbert has his own twitter account! He's now talking to penguins around the island, just tweet him and he'll be sure to give you a reply like this. "Silence little Trainman, or I shall ensure you go off the rails" LOL The person who is really sending all these tweets is most likely a moderator, but get this: Herbert's told everybody now that Operation Blackout is coming next month when we least expect it. Here's a picture from Lane Merrifield (Also known as Billybob) 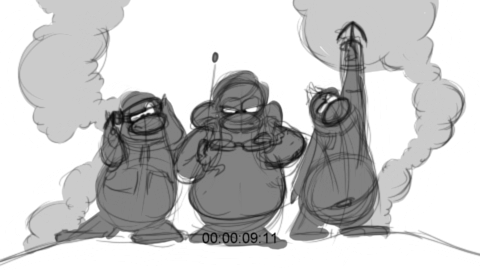 This is only a sketch, but you can see that the EPF penguins have a lot of gear, there's smoke around the place, and it looks very dark. There's going to be a countdown, and it'll happen on the 9th day of November, that's only a guess but it seems likely as that's what the countdown shows. The guy on the right has a hook from the EPF Game on the DS (Did you know, that's where the EPF first were spotted? I love that game!) There's this other thing about Snow Ninjas ~ Gary is apparently going back in time ok, this means that we could change the future so we might as well do it by accident. When we arrive in the present again, the whole island will of blacked out or something like that because we're not expecting it if that's what Herbert says on his twitter. The storm will darken things a lot but will it stay there like previous years? November is the month that usually contains ninjas ~ will they be there? These are only my predictions, but it seems very likely as we know that Operation Blackout is coming. 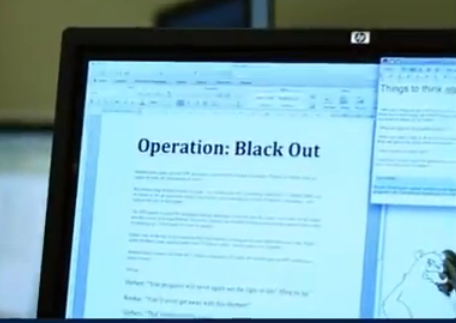 The picture above shows what will happen in breif, there's going to be a whole lot more. It's very hard to read as when you take a photo of a computer, it is quite blurry. I can see that Rookie's name is there ~ maybe it will be a mission like the PSA missions. Only time will tell, but what I'm so annoyed about is I'll be away in the middle of November for 5 days! Do you agree with my predictions?
Posted by Echo006 at Friday, October 12, 2012