Beyond The Mountains ~ Fact File

Beyond the mountains, legend says that an ancient penguin (known as Sensei) built a dojo. This was before many of the other penguins were around. He was never seen until Halloween 2008 when lightning struck the Dojo. Penguins began digging to find the arts of Card-Jitsu. A grey penguin appeared and many wondered who he was. Ninjas were also spotted and then the rumour became true. The courtyard opened on November 14th 2008. Penguins can begin their journey by entering the double doors however on the inside of the Dojo only one door is found. Like many of the rooms in Club Penguin, they all have small details missing. 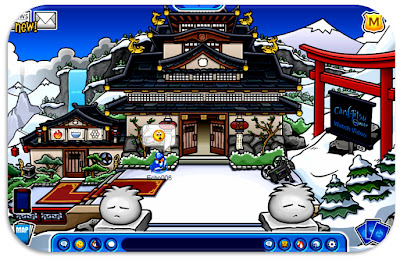 ...Inside the Dojo there are four mats to practise Card-Jitsu. Every so often, ninjas will appear outside the windows of the Dojo. Another tiny detail: the ninjas cannot be seen from the Courtyard. There was once a rumour that if you stood still here for thirty minutes you would become a ninja. I tried it once ~ it never worked until Sensei came along. This room was once empty and I can remember how it was decorated. For example, when the water party was on there was a giant octopus in the room. There was once a book in the Library called Lime Green Dojo featuring a penguin who had to clean the Dojo. This was before Sensei came and the book is now removed for further space. 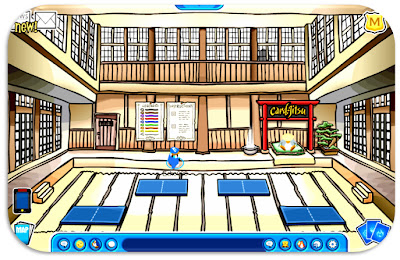 ...Next we come to the Ninja Hideout. This room is for ninjas only once you have completed card-jitsu. Becoming a ninja was far easier back in 2008 and 2009 as lots of penguins wanted to become one. Now, most of the population are and it is harder to find penguins to play with. You should always try to become a fire, water, snow ninja when the celebration first begins. Remember to go on high severs or play with a friend. This room also contains a catalog for members to buy. It contains furniture and was updated with clothing a while ago. In the middle of the room, you can see an amulet. Once you are a ninja of an element the element on the floor will shine and a new stone will be placed on your amulet which can be obtained from the catalog. For a short while during 2011 at the Card-Jitsu party non-members were able to become water ninjas and fire ninjas. Enter a door to find the water and fire dojos. The Snow Dojo is believed to be placed on the right, opposite the fire dojo. This is a great place to hide when playing hide and seek as when a penguin clicks on the find button on your playercard it will say you are hiding. Now, let's proceed... 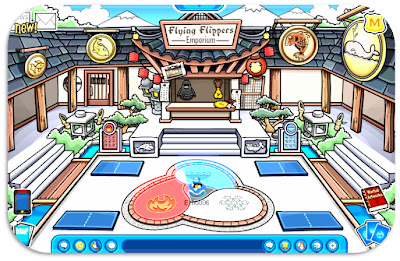 This is the Fire Dojo. It is bursting with flames and hot sauce. Two ancient statues can be seen along with two giant lanterns of fire. There can be up to four players playing Card-Jitsu Fire and there are 8 possible stamps to collect. The instructions are on the wall and you can also ask Sensei how to play. This room is also known as the Volcano. This erupted on September 14th 2009. Apparently, non-members can play in this room using this link http://play.clubpenguin.com/?login=true&rm=812#/login/ 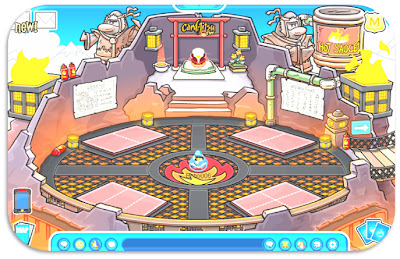 ...Next we come to the Water Dojo. Our last stop is this room ;) This room opened on Novemeber 16th 2010 when a storm approached the island. Apparently, non-members can enter this room by this link http://play.clubpenguin.com/?login=true&rm=816#/login/ The water dojo is full of water and two ancient statues are here like in the Fire Dojo. The fish that can be seen in one of the statues was put into the water dojo when we found the water objects ~ it then decided to live here. You can see Sensei in this room just like the Fire Dojo and the Dojo. This is not possible as Sensei can only be at one place at one time ~ but these are only clones as you will not get the stamp when you enter the room. 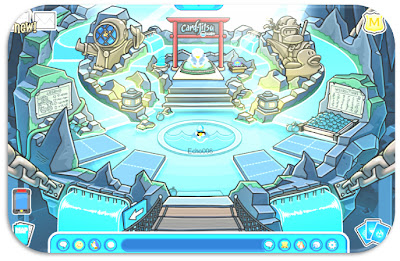 Looking at what has happend so far ~ the weather changed when the Fire Dojo appeared, and it also changed when the water dojo appeared. I think that when the Snow Dojo comes (hopefully soon?) there will be a blizzard or something like that. There is rumour of the Shadow Ninjas ~ these are just a rumour and a sketch that the Club Penguin team made up. Don't believe all the rumours you here, young grasshopper.﻿
Posted by Echo006 at Monday, September 17, 2012