The Secrets of The Wilderness ~ Down The Mountain

It was seven o'clock in the evening. The sky was dark, and the sea was a murky colour. Airplane, Bubsey, Polo Field, Perapin, Pizzapuffy, Pen Que and Brownie were waiting for me. There were big crowds behind us - just because we were famous. That was all part of the plan - being famous.
"How is being famous part of a mission?" said Bubsey. "I was the teacher, police and alien in the movies!"All the penguins down below thought we were just having a sled race. We sat on the Ski Lift, and watched the penguins behind us slowly fade until they were like ants. Security was tough now. The plan was that me and my team would go up the mountain, and then have a sled race. But suddenly, we would disappear, down the other side of the mountain and into the wilderness. The security guards would be puzzled, and there would be lots of screaming fans crying out for us, but nobody would know what had really happened! We arrived at the top of the hill. This was the tricky bit, because everybody was watching. The security guards knew what they had to do - they were all EPF agents too. They gave us the sleds, and we got onto them. We were at the highest point of the mountain, where nobody below could see us. Quickly, we rushed down the other side. Nobody had seen us, except the guards. We were gone... 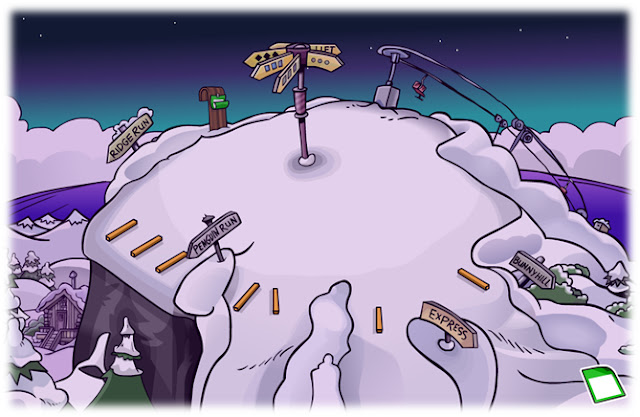 ...The rush of excitement came first, as we slid down the mountain, disappearing from sight. Polo Field shouted something, but I couldn't hear it against the loud rush of snow. We were hitting fast speed, and this track wasn't designed for sleds. It wasn't ever used, and hadn't been since the PSA! We swerved round corners, barely missing the edge, and fell off a few times too! It was really scary, especially in the dark, but at least we had each other - a huge team of penguins. Finally, we reached the bottom and found the wilderness. A bunch of trees, behind tall mountains. I suddenly realised something and I immediately asked the team.
"How are we going to get back to everyone else?"
"Um, good point. We didn't think of that one, did we Brownie?" replied Airplane. Brownie shook his head.
"Well, it doesn't matter. Let's just find a small cave, light a fire, catch some fish and boil some water." said Bubsey. We knew he was right. If we didn't have all the basics, we would die frozen in the cold. Perapin knew some tricks on how to light a fire, and Polo Field was already busy collecting wood. Pizzapuffy and Pen Que were looking up, gazing at the stars. Brownie and Airplane were searching for a good cave, and I was standing there, amazed at the beautiful night sky. The mission had begun!
Posted by Echo006 at Thursday, March 07, 2013