Here's this weeks news! Though nobody comments on these posts, I'd still like to make em, but with not as much detail. The Puffle Hotel Construction has begun at the Plaza - that's two lots of construction at once - I've never seen that on CP before! Plus, the Penguin Style has got MILLIONS of items! 40 on one page, and the new penguin models are looking better now. I guess I could get used to them, but I wouldn't want to have one like me - that would look stupid. 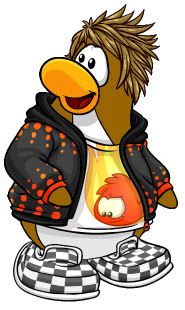 ...Now is the picture on my jacket a red puffle on fire, or a black puffle on fire - hard to tell, right? Anyway, just to let you know (as the post is called) I'm going on holiday for one whole week on the 1st April. Pretty good timing actually, just as the Puffle Party ends so I won't miss much! Just the Penguin Style Catalog for that month, and some updates maybe on the EPF, but either way - Penguiin23 (the designer) will be posting! Thanks all for reading - that's all for this week ;)﻿
Posted by Echo006 at Friday, March 08, 2013