The Secrets of The Wilderness ~ The Plan Unfolds

The voice was just inside my head. If I was being honest, I was totally scared. I was trying to think of something to say to Herbert, but I couldn't. I had lost it completely. Cliky Minty comforted me.
"It'll be ok. We'll escape, somehow. Don't worry!" She said, calmly. We stepped into Herbert's cave and to our surprise, there was a large bottle of hot sauce and Herbert's older failed machine - that's why I found the plans flying about! There was still a hole where we had escaped, but Herbert didn't seem to notice that.
"The whole point," he started, "of my plan, was to let you escape!"
"Oh yeah right. I bet this is all Plan B," Polo Field replied.
"Believe whatever," Herbert started again, "this isn't my actual cave. You'll notice that this cave is inside a mountain. And if I press this button, you'll see what I mean!" He pressed the button, and we knew what to expect. He had made a giant cave out of all of Club Penguin's mountains. The tallest mountain, twin mountains - all of them. Kluzty was here too. He had stacked tons of pizzas up in a pile. 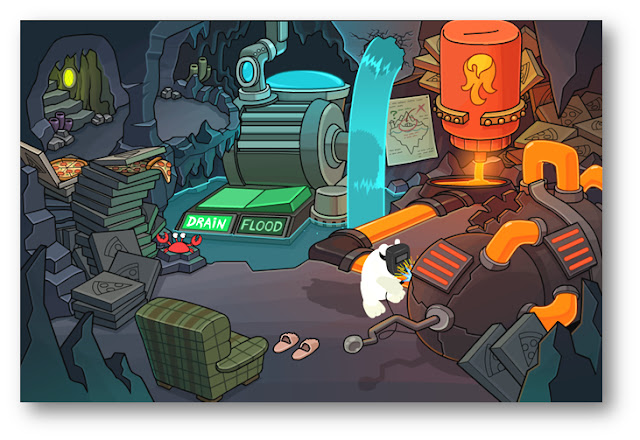 "Anyway," he said, "Before I tie you up, I suppose I better tell you my plan. As I was saying before, I had stolen the EPF technology, and whatever. The next part of the plan is the deadly part. It was very cunning and mischeivious but I got away with it. I need you all. That's why you're here. Otherwise, you'd be running away for your life right now. But no, you are the biggest part to play in my plan. Without you, it won't work. I decided that after failing Operation Blackout, I might as well give up. But I still had one plan left to destroy your island. Heating it up won't work. Getting rid of the sun won't work. Sinking the island won't work. Making earthquakes, all sorts - failed. So I decided to go extreme. I stole all the Hot Sauce on Club Penguin, while you were up in the clouds. It was actually easier than I thought, ever since you redecorated the Pizza Parlor, you put it in one giant bottle! With this hot sauce, I will pour it all over Club Penguin from this mountain, which has the perfect view of everything, therefore causing the whole island to BURN! So, at midday, you all will broadcast on live Club Penguin TV that you are going to do this. Nobody will trust you, and of course, they'll all run for their lives. The hot sauce will cover everything and then your precious island will be destroyed. Even these mountains. I'm getting rid of it all. Then, when you've all quickly escaped to another island, I'll make this into a beach. I've got a truck load of sand, ready to set out. Then, I'll use my old plan and bring all the sunlight onto me, in my new paradise. It's perfect. No penguins. No snow. Warm and sunny. Nothing can stop me now!" I was about to cry. The whole island would be destroyed, all the penguins would leave by boats, and we'd be the blame!
Posted by Echo006 at Saturday, April 27, 2013