The Secrets of The Wilderness ~ In My Igloo

"What did you do that for?" shouted Polo Field. We were back in my igloo, after teleporting away from Eric who was explaining his evil plan.
"It was our only chance of escaping. If we'd stayed there, we would be trapped forever in the lasers!" I replied.
"Yeah - I can't believe he forgot about the EPF technology!" Perapin said.
"Sure, but what are we meant to do now?" Bubsey Good asked.
"Well, Eric could trace us somehow, so he might be able to find us, right?" Cliky Minty asked excitedly.
"Yes. In the mean time, we need to make a plan! If Eric comes here, we need to be able to trap us. He never actually said why he did all that, did he?" I announced.
"He must need the EPF technology for something!" Bubsey shouted. Quickly, I waddled over to my computer and found an email. It was from Eric. He was tracking us down as we read the email. Quickly, I deleted it as soon as possible. 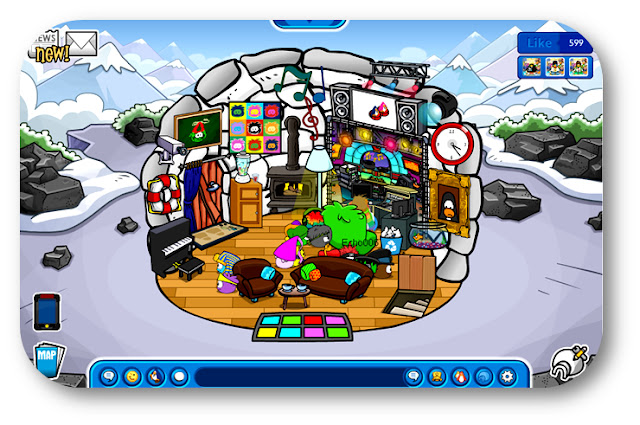 "He's onto us. Don't worry, we have a few minutes before he'll find us. Here's the plan. I've got a bunch of lasers in storage. When Eric gets here, we'll trap him!" I said.
"Wait, he could just teleport out, like we did!" Polo Field added.
"Don't worry about that!" Perapin said, "I'll figure out something." So we all started building the lasers together, surrounding the area in my igloo. Eric would never be able to escape this trap. After a few minutes of preparation, Eric finally came. I knew he would. He wouldn't just leave us here - he could track us easily, and he needed us, for something.
"HA! I've got you peng-" The lasers powered up. Perapin had Eric's stolen spy phone. We had caught the bad guy!
"No, you haven't! It appears that we've got you. Anyway, Eric - tell us more about your plan. Why did you do it? Why did you steal the EPF technology?"
"GAH! You stupid penguins! I'm not even a penguin! I can't believe you got me."
"What do you mean?" said Cliky Minty getting worried. Suddenly, I noticed something. On the back of Eric's hair, there was a small zip meant to blend in with the hair. Eric pulled it down and something we didn;t want to see, appeared right in front of us - Herbert!
Posted by Echo006 at Sunday, April 21, 2013