The Secrets of The Wilderness ~ Up In The Clouds

It was no longer a mystery. There was no secret about it. Nobody else knew, but us - the team who had been sent to search the wilderness and had stumbled upon a big secret. There were rainbows everywhere and we instantly knew that this wasn't about the wilderness: it was about the clouds. A few of the puffles must of dropped down from the clouds, accidentally, and then managed to find their way back. But something didn't make sense - the yellow robot puffle that seemed to be programmed by the rainbow puffles! It was strange, but that didn't matter. We were in the clouds! How they were holding our weight was kind of impossible, but again - nothing mattered anymore. We had found the rainbow puffles!
"I think we might want to round them up!" said Perapin.
"Sure, I've played that game hundreds of times!" replied Cliky Minty.
"Yes, but these are rainbow puffles, remember?" Brownie answered.
"Right, they're heading in that direction. So, if a few of us stay here and the others move ahead, we could try and get them in the middle?" said Polo.
"Sounds like a plan!" I replied. 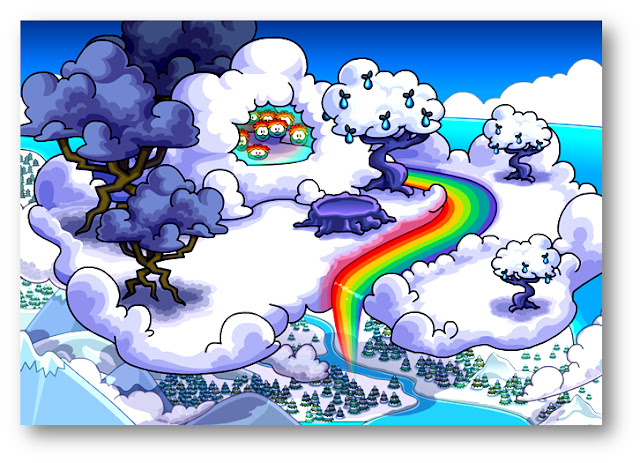 The clouds were thick and jumping through them was amazing. It wasn't just a normal cloud, and that made me think, we had never actually been on a cloud in our whole lives. We didn't even know what they were made of, apart from that they could turn red and blue with the power of the ninjas! Suddenly, I found myself pushing towards two rainbow puffles. They were jumping up and down, and before long, many other penguins had gathered at the top of the Puffle Hotel and were joining in. Everybody was trying to grab them, and being in the clouds, it was quite a rush! I found Perapin gazing at one of them - he picked it up. I watched Pizzapuffy and Pen Que grab one each, and soon everybody had one - including Polo Field! After a few hours of searching and rounding up, we soon discovered that there were millions of more clouds to explore, with tons more rainbow puffles! Cliky Minty and Bubsey Good decided that we should all go back down, and get a proper search team to get the other puffles out soon.
"I think it's quite mean that we're taking them from their real habitats." said Perapin.
"Yeah, I agree. But multi here is awesome, and I'm sure they'll like the snow." replied Bubsey Good.
Posted by Echo006 at Monday, March 25, 2013