From the fantastic work of Saraapril, she has spotted a missing peice of the map! This could of been torn off and just of been sea, or it could of been a secret island! Who knows? Check it out: 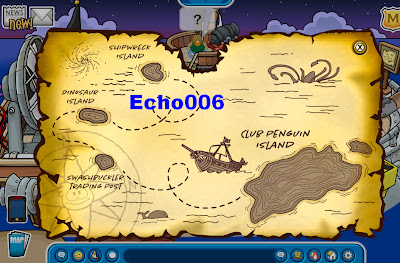 Some penguins say it could be Rockhopper Island, but I think it could just be another part of the Club Penguin ocean because if you look on the EPF screen it shows you that the island is over to the left, but Rockhopper travels South when he leaves and the islands are closer to the West. But I'm just making that up, look at those three small islands to the left of Club Penguin. Where could that be? 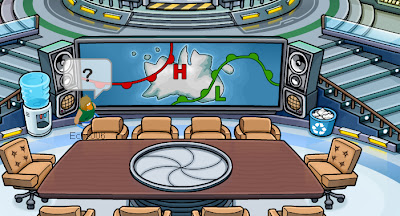 It certainly could be a missing island, but would Rockhopper Island be that small, just one room? Dinosaur Island is only one room and it is just a small circle, so if Rockhopper Island is just one room it would fit, but what if it was more than two rooms. Then again, why is Shipwreck Island two rooms yet only one small circle? So which conclusion does it come to? I've been sat thinking about this at Dinosaur Island. 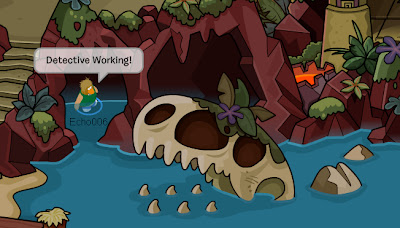 A very excellent blogger, Ethan80561, stole this from Saraapril and gave no credit to her at all! I told her to give credit to her and she did, and she also stole a Spot The Difference idea from Saraapril, then she quit her blog! This is very unusual, and she is probablly under 13 which is not ideal for a blogger. So what do you think, is there another island somewhere out at sea? But do you remember the Brown Puffle Island? There were only three islands on the EPF screen, so could there be another island?

This is just my predictions, I'm not really sure where it could be but maybe it could be an island that Herbert will wash up on shore and then start plotting, or if it is a tropical island he will stay there for all his life and never bother us again. But thats what I think, tell me in the comments if you have a suggestion and I'll post one or two to get your brains working! :D
Posted by Echo006 at Monday, March 05, 2012