The Secrets of The Wilderness ~ Finding A Way Out

It was dark outside. Now was our chance. I leapt forward and screamed as loud as possible. Quickly, I grabbed a hammer from my bag (which, stupidly, hadn't been taken away from me) and started banging on the pipes in the room. Consequently, a strange gas was let out and the room was filled with smoke. I knew what I was doing. All the cameras now wouldn't be able to see what we were doing. A few hours earlier, Perapin and Polo Field had begun to build a hole in front of the door, with a jackhammer. It was very noisy, but nobody came in while we were doing it. Cliky Minty had already found the way out. It was actually very easy, escaping - all we had to do was find an exit - other than the locked door. What Eric hadn't considered, was that the rocks in this cave were already falling, and after some jackhammering and banging with the hammer, eventually we hit snow and after minutes of digging through it, we managed to climb out into the fresh air. Only it wasn't fresh. It was damp and cold - colder than ever before... 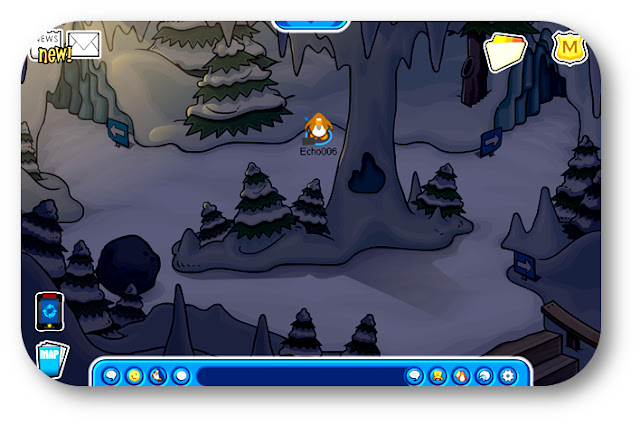 ...Somehow, after a few hours of sitting in a cave, Club Penguin had been hit by a snow storm. It was crazy, but true. We had crawled out of the cave, into the wilderness. There were icicles dangling from trees, and snow was piling high. A tiny bit of sunlight crept out through the darkness. The sun was setting, and before long, it would be pitch black. We were able to escape from Eric, but would we be able to escape from the snow? Out in the wilderness, it was very hard to find your way around - especially in deep snow.
"Where do you suppose we go next?" Cliky Minty asked.
"Well, considering the options," Perapin started, "I would just go back inside the cave. It's a lot warmer in there. But that'd be giving in to Eric. We can't do that!"
"Agreed," said Polo Field, "We need a strategy."
"I guess we could just wonder around." added Bubsey Good.
"No, no no. That won't get us anywhere. We need to think practical. EPF tech is still down. That means that our mission isn't complete. We need to find Eric - HE HAS ALL THE EPF DATA!" I replied.
"Yes, I think we forgot about that. Shall we go after him? He can't of gone far, could he?" said Bubsey.
"He might have a spy phone too - and that means he could've teleported anywhere." I added.
"Don't worry guys. I have an igloo over there." said Polo Field.
"Why didn't you say so?" Perapin replied. We all quickly waddled into Polo's igloo, and sat down by the fire, figuring out which path to take next...
Posted by Echo006 at Monday, April 15, 2013