The Secrets Of The Wilderness ~ Finding The Others

We hadn't walked far before we came to a huge jungle full of wildlife that I didn't even no existed in Club Penguin! There were puffles, giraffes, and all sorts. I kept thinking I was seeing rainbow puffles, but I instantly forgot about them and continued looking for Perapin, Bubsey and Minty. They had to be somewhere nearby. We had been searching for ages, yet it was impossible to see where anybody or anything was.
"Polo?" I shouted.
"MARCO!" I heard a reply come from the bamboo.
"Oh there you are!" I said, "Do you think we've got any luck of finding the others?"
"No chance. They must of walked into a trap or something. Remember what our mission was?"
"Yeah, to find out who was hacking into the EPF."
"Well, of course. Maybe the rest of the team have already stumbled upon who that is." I thought about my training, when I became a tech agent and how I defended the systems. Quickly, I gathered all my memories of the EPF villains, and all the elite agents. 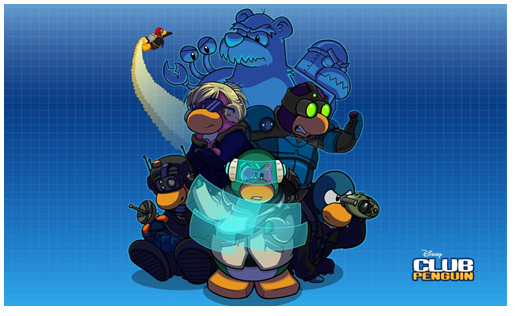 I was snapped out﻿ of my daydream by a loud cracking noise. I had stepped on a twig!
"Watch out - there's a lot of dangers here." Polo Field told me.
"Do you think we'll find them?" I asked.
"Of course! Look they're over there!" Polo Field replied pointing in the distance.
"It looks like they need help! All this time, my EPF training skills will now come in handy!" I shouted. We quickly ran over to them and found the problem. There were lasers surrounding the area of where the team were heading. It looked like it was heavily guarded, and there was no possible way of getting through.
"Thank goodness you're here!" came Bubsey Good's voice.
"We're really stuck here - can you help us?" asked Perapin.
"Sure!" I said, grabbing my computer from my bag. I quickly opened it up, found some spare wires in the laser machinery and managed to get into the laser software. Now all I had to do was shut it down.
"Wow! You're amazing!" said Cliky Minty, as the lasers disappeared.
"Not so fast, you menacing EPF penguins!" shouted a voice from behind. We slowly turned our heads and were shocked at who we saw. It was...
Posted by Echo006 at Saturday, April 06, 2013