The Secrets of The Wilderness ~ Making A Plan

Previously, our team of penguins had discovered Rainbow Puffles and then lost them for some strange reason. Now, the EPF is under threat and the team must head back to the wilderness and find out what is wrong, hopefully making no more mistakes!
I knew it. Something just wasn't right. It didn't make sense.
"Those rainbow puffles - you remember them, right?" I asked Polo Field.
"Yeah, sure. What about them?" he replied, walking through the wilderness.
"Well guys, I've been thinking. You know when we found that secret puffle that was really a camera disguised, following us?" I said slowly.
"Yup! I didn't quite get that." said Perapin.
"Just because the rainbow puffles were on the screen when we looked at it, doesn't mean that it was them who were programming the gadget. I think we were meant to follow the wrong track, while whoever it really was planned their attack on the EPF."
"That's very clever!" shouted Cliky Minty. Lots of penguins had left our team recently, due to not wanting to continue with the mission, for some strange reason. The only penguins who were left were me, Polo Field, Perapin, Cliky Minty and Bubsey Good. Suddenly, in the forests, I saw something out of the corner of my eye. 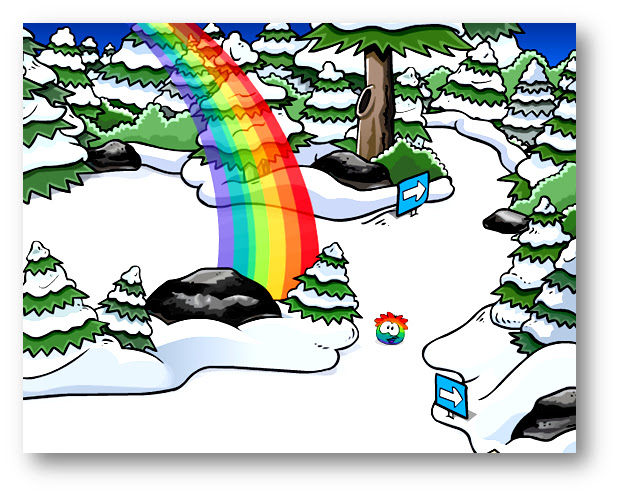 "Hey, LOOK!" I exclaimed.
"It's the rainbow puffles. Yes, it's really them! Let's follow them." shouted Bubsey over the roar of excitement and giggles in our group.
"No, we can't be tricked again." said Perapin, kindly. "Remember what you said, Echo? Sure, we could go on a search and find them all again, but that was our mistake last time. We can't do it again. This is the plan - stick to the path, and avoid any strange things around you."
"That's a great idea, Perapin!" replied Polo Field﻿.
"Yes, sorry." I calmly said. "Let's move on, come on. Aunt Arctic is counting on us."
We followed through the wilderness, not stopping at any signs of the puffles we had once lost. Hopefully, other penguins would be searching for them now and they wouldn't be lost forever.
Posted by Echo006 at Sunday, March 31, 2013