My Igloos 1 ~ The Jungle

Since I've finished writing up about "My History" (Check the Library to view it!) I've started a new story - but this isn't a crazy story, it's about my igloos. The different types I've created over the years, and the different styles and items I've put into them. NOTE: Some of the pictures may be bad quality, as some are from a few years ago.
The igloo that I'd like to share with you first, would have to be my jungle. This was the first time I'd ever tried creating a massive garden, with flowers and all sorts - but I wouldn't of been able to do it without a glitch from Club Penguin. At this point, Club Penguin hadn't re-released the garden soil in the catalogs, so I only had a few, but the glitch provided me with lots more! It also gave me the chance to add a few more trees to it! I added as much as I could, adding carrots, flowers, pumpkins, corn and all sorts. Then I added some other plants to it. Then I started to work on the inside of the igloo. This part was more difficult as I wanted the attention to be on the outside of the igloo, not the inside so I added just a few paintings and a few items. In the garden, I wanted the sun to shine onto the plants, therefore I put in a giant tree which then contained sun beams shining down, even though on the window inside, it was night outside. 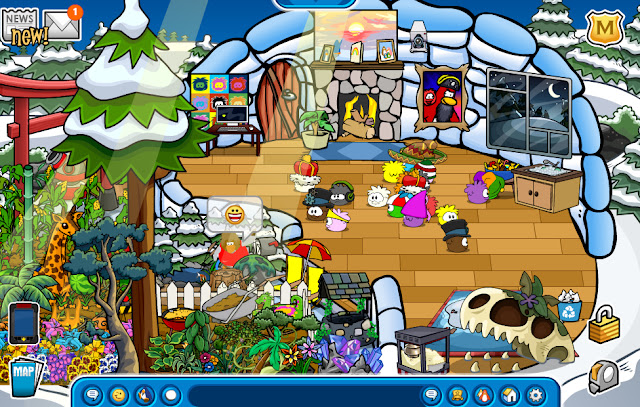 I'm really proud of this igloo. It was one of the first major igloos that I made, especially using the old igloo design, which was very tricky - I could only have one igloo at a time! This igloo was reallt special, and I even have it out today with a few adjustments to it, like the carpet and not so much soil and more decorations inside the house. I always love having rare items in my igloo, and you'll notice that I'm most likely always to have Rockhopper's Portrait out, as that is really truly amazing!