The Dark Night: The Blackout ~ Part 6

This is the conclusion to my latest story. Previously, I've time travelled to the year 2012 and I have to put a stop to Herbert before he destroys Club Penguin forever. To read the other parts of the story, click on the page (on the right hand side) named "How It All Began" This page features my three stories. One terrible, one long and one is this story. Scroll to the bottom of the page and start reading part 1 of this story :) Anyway, all good stories have to come to an end ~ this one is quite a cunning ending and without any explanation of what happened next...
Yes, the blackout has begun. Great. Temperatures are dropping like mad. Herbert has taken over the newspaper, the penguin style catalog, in fact ~ the whole island! Soon, we will all freeze to death. I don't think anyone really notices, but it's up to me to stop him. I have to start somewhere ~ I've been thinking and thinking for ages and now I've finally gathered out my plan. I have a large light source, and I've placed it here at the Mine Shack. It's well hidden and it'll blow with light in a few minutes. I'm waiting in a bush by Herbert's Lair when he notices the source of the light. 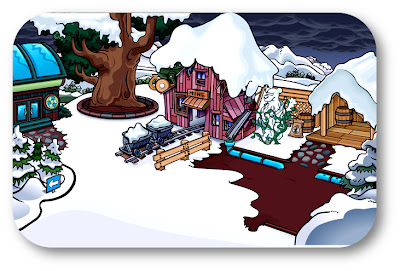 The thing is ~ he doesn't leave his lair. My plan has backfired! But his crabs open the doors and leave! Quick thinking ~ I put on my old crab disguise that Dot gave me back in Herbert's Revenge :) They don't notice me and I quickly sneak through the doors into Herbert's lair. It's boiling in here! There's lava to heat you up and if that isn't enough, there's loads of sunlight. What is wrong with this polar bear? No time to think. I've got to stop Herbert but I can't get past him ~ then I notice the ventilation system. I sneak through, and you'd never guess what happens next. I get stuck. It's that stupid crab costume. I'm crawling on my flippers now and I notice Herbert sneak beneath me. I push off my costume and crawl as fast as I can. I bet Herbert can hear me ~ atleast I have a teleportation device. I press a button and poof ~ back where I started, surrounded by lava. There's a ladder ~ I waddle down it and find myself surrounded by crabs. 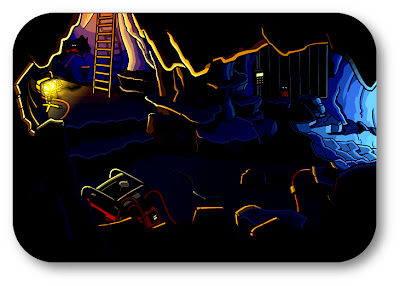 Far too dark to see where I'm going. I can't see anything and I'm constantly tripping on rocks from the crumbling walls. While I'm stuck down here, it's getting colder up above ~ I bet the snow is in big heaps now. Now think again, I know that the solar laser is most likely right above my head. But Herbert's up there and I don't think he'll be that stupid to lock me up. Nobody else is helping me ~ but I have to find a way of sneaking out. Because I'm so small, I squeeze through the bars into the crab's cage. My eyes are adjusting to the darkness now. After all, there is no sunlight up above anyway. I find myself in a series of twists and tunnels. Which path should I take? Left or right? It's a hard decision. A life or death decision. I turn left and notice another vent ~ maybe I could squeeze through it! Yes, I do. It seems like I've gone in a great big circle. In fact, I'm at the source of the solar laser! ...Without thinking, I jump onto the machine﻿ and hold on tight. I climb up to the top, and point the laser in a different direction. It shoots away onto some glass and reflects back onto the mountain. There's going to be another avalanche! The sun has started glowing, but there's still loads of snow on the island. If it all comes tumbling down, we won't be able to find our way out of the snow! Too late for thinking now, this laser machine is about to blow up and an avalanche is about to start! I can't run through the lair ~ too late. I'll have to jump. I land in a forest and poof. I'm back in the year April 2008. I don't know whatever happens next ~ I guess I'll just have to wait four more years and find out if Club Penguin did explode. I bet I caused a lot of damage, but what I can't understand was how I got back into my year. Past, present or future? What was with that Shadow Ninja guy? There's lots of explaining to do ~ but I just simply can't find the answer!

What really is annoying is that I never found out what that octopus did. I mean, seriously? An octopus. But strangely enough, last night ~ I had a dream. It was about the octopus. It was just a faint vision but I saw him. You'd never guess what powered that solar laser machine. Yeah ~ it was the octopus with the wig. But what would of happened too him when the machine blew up? I'll save it for another time :) ﻿
Posted by Echo006 at Thursday, November 29, 2012