The Dark Night: The Future or the Past ~ Part 3

...This is my latest story ;) To view the first part click here and to view the second part click here. This is the third part of the story. Previously, I set off into the clouds to find what was causing a strange storm full of clouds. The date is April 10 2008 :) It's the past and I've been ignoring something I shouldn't of. You're about to find out. Good luck, hope you don't find it to hard to understand. It's very complicated :)
I didn't last long before the fuel levels reached low. I knew I couldn't make it any further up, so I headed for this house, you see, with a big patch of land. I landed softly, with the aid of me parachute. It's still very dark. Sky's full of stars and the clouds are gettin bigger and the thunder's gettin louder. I need shelter. I decide to enter the dark house. Its a scary house. Decorated for that theme that those americans celebrate ~ yes halloween. But it ain't the time of year for that ~ is it? No, this ain't the way it happened. The storm didn't come on April 10th. I got it all wrong. The date's messed up. The whole thing's messed up. It's eating me alive my nerves are. I've forgotten everything and I just don't know what to do. I creep into the house, hoping it'll lift my spirit. Not literally. 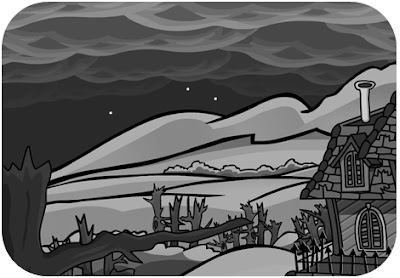 ...Yeah it's spooky alright. But this sure can't be April 10th. It must be a dream, but it's too cold. In dreams ye never notice the weather. It's some sort of haunted house from the future. I know it because I just, I can't explain it. Time's all muddled up. It's a paradox really. I've read this book ye see, it's got everything ye need to know bout the future. Got everything rigged up until 2012. Thats 4 years away, London's got the olympics. Anyway, so I know everything about the future. Sensei, Cadence, Herbert's plans and everythin. But I don't dare say a word. It got passed to me from a guy from the future. He tells me he don't have no name. It's apparently something I do in the future which messes up the whole universe ~ you know what I mean? 2012 it happens, he says I gotta stop the storm. Ye know the halloween party ~ well he dies. He's dead and he's a living soul come back through the past as a ghost. Yeah, don't believe me. Nobody would. 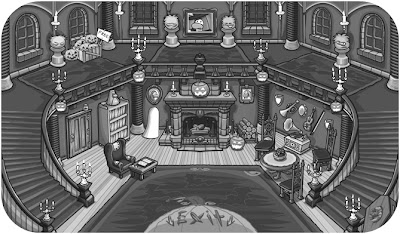 I walk through a door in the haunted house. Everything's muddled up. This should be the future ye know? I got a bad feeling that the guy who talked to me from the future, was me. But if I change the future, that could change the whole world. But the whole world's already wrecked ~ from what he says or what I say. Anyway, enough of that let's get back on track. I look around and see a door. It's closed, but I've always loved spooky stuff. I walk through the door and there's a blinding light. Then a flash. I see something grey and shadows pop up. Ah, yes this must be the shadow ninjas. They come soon after the snow ninjas from what I've heard. That's what everybody in the future thinks but the guy told me it ain't happened yet. Why is it when ye mess with the future and the past and the present things always get so confusing. So I walk up to the shadow ninja and tell him he's in the wrong place. I can hear the storm outside getting louder and then he tells me I'm in the wrong place. He says this is the year 2012 and he isn't alive yet ~ he's from the future. Great, I've slipped in time to the future (or the present to those of you in that year?) and now I've got all muddled up in a giant story and the world's about to end. Great ~ ye see this is what Halloween does. Don't bother celebrating ~ the darkest times are coming. The Club Penguin world is going black for two whole weeks. Starting sometime on the 9th of November 2012. That's a Friday ~ could be a day before. Only I know ~ but it's Herbert. He's messed everything up and we're all gonna die. Halloween is awful.