I've been posting on this blog for one year now. I always try to post as much as possible as in the future, I would love to look back at everything I've done. As I grow older, I won't be able to post as much due to school (everybody has to go, everybody has to find the time to play Club Penguin) My time will soon become less due to tests, performances, high school etc but that won't stop me blogging. Now, one year ago the Fair had finished and Puffle Hats had just arrived. I remember posting about them ~ I'm way more experienced then I used to be. If you've seen my old posts, they were terrible but now I'd like to add some humour into my posts instead of just talking loads. So, let's get to it. The Fair is near and there's construction at the Beach ~ this reminds me of January! Hope there won't be any more boxes, but how could you keep a puffle circus in just that? The poor puffles ~ trapped inside some boxes. 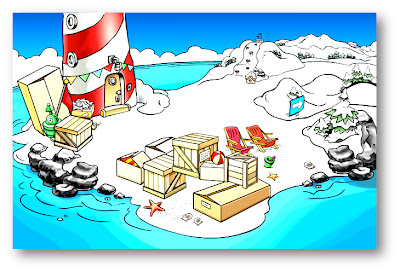 I'm going to be making the pictures a little brighter as if things are dull, just come and lighten up your spirit here! So, do you like the idea of adding humour and a little brighter pictures?
Posted by Echo006 at Friday, September 14, 2012