Recently, I've been into making igloos. I made the Cozy Cottage igloo (which has been reviewed) and before that, I came up with the idea of a Big Screen TV Igloo which also inspired other penguins to make their own like Zowey30000 and Penguiin23. I was thinking, and I decided that I should make another igloo. I wanted an igloo that was unlike any seen before. I didn't want an igloo which penguins had already made - I wanted something different! So, I started to work on my backyard igloo. In case you didn't know, I've collected A LOT of plants in the 5 years I've been playing Club Penguin. I wanted to include almost every variety, and I knew that wouldn't be possible in an igloo, so I made a backyard igloo with a little window to make it feel like a backyard that you could walk straight back into the igloo. 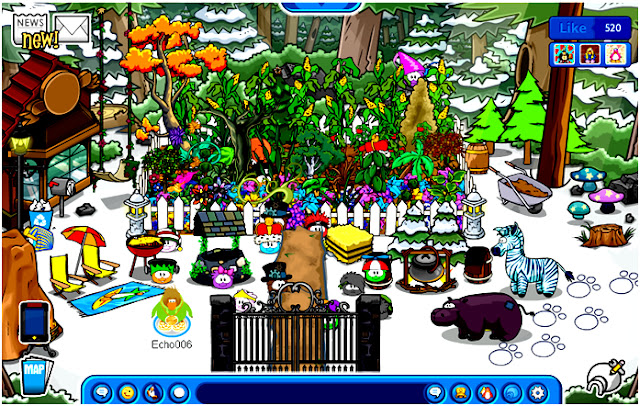 I wish CP would do that: the ability to walk into one of your other igloos, just like that. Anyway, I wanted to be enviroment friendly, by adding forests and a big big patch of flowers, corn, trees, and vegetables. Then I added some other trees on the outside of the patch, put a long fence around it all and added two seating areas and a well. The animals are stray, but like to come in for food. Of course, you're not going to find Zebras and Hippos on a freezing island, but that doesn't matter! I added the path, which leads to the back gates which lead to the Snow Forts (check it out on the map)! I also made this backyard in memory of Rockhopper, because I don't see him too often now, so I added his three flowerplants which are forever changing from growing, to dieing. Also, I'm going to make a new page called "Echo006's Igloos" and it will have information like this of all the igloos I have made and their names too!
Posted by Echo006 at Sunday, March 03, 2013