Seriously, I just waddled to the Forest and I found a mansion. Must be Gary's Uncle ~ right? Yeah, anyway let's go explore. I'm not one for just waiting outside. Seriously, what's any harm in a computer game ~ you're avatar isn't going to get killed (well it nearly does, but that's later) so let's begin. But first of all, let's see Club Penguin's first art mistake. At the Iceberg, the moon can be seen to the left of Club Penguin, however when at the Forest the moon is behind the Mansion (yes, it has grown, and it is closer to the island) It should be high in the sky, not at the forest! The trees should be covering it ~ but nobody really notices except penguins who are really picky at details. So, what ya waiting for? Get off that computer and head to a real mansion on a computer. Hmm, computers rule are lives. 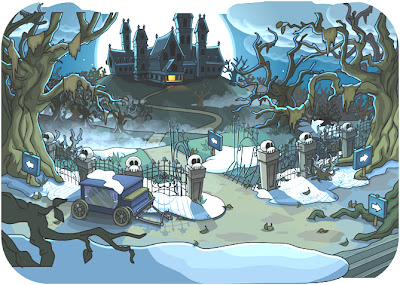 ...Now if you're wanting cheats. Then here's just how to sum it up. Click on the box, then click on each key and it will take you to that room. Click around in that room till you find the key, then you'll get ghost goggles. Head through a door that wasn't there before, then get in the ghost machine and bang you've done it. But, if you're not bothered since there's still 11 days left till the party ends then why not go the more scenic route? 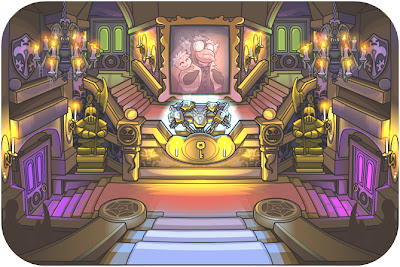 Ok, pick a door. I don't mind which. Now, you may not go in the same order as me, but this is how I found my way around. Here's a library. There's always secret exits ~ you know the drill, if you've seen it in movies or not, but there's always something hidden behind the bookcase in a haunted house, right? Oh and grab that key while you're at it. 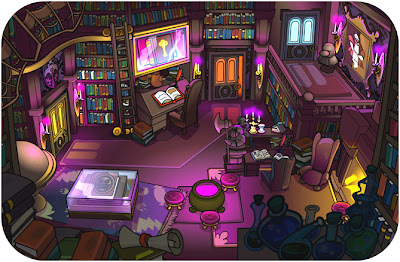 Now, this is kind of strange. There's lots of different exits and entrances. Look, where are you meant to go? Ah, who cares just sit at the dining table and eat whatever is inside that. Mmm, chewy. EWW It's rock hard ~ oh wait it's just another key. 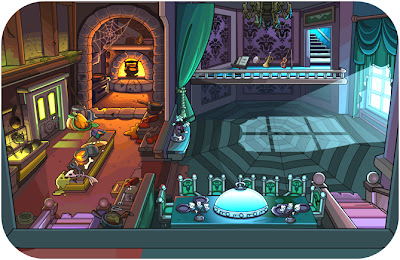 ...Now, look. You've made it halfway. Don't go down ~ that'll take you to the beginning. Carry on going left or right or straight on depending on where you're looking at it from. 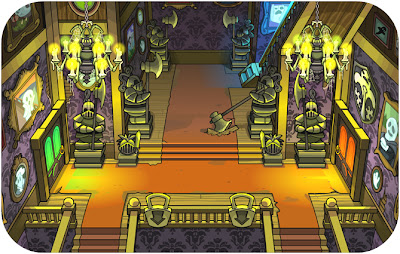 ...Ok, I don't know how I stumbled upon this room. But it's creeping me out. Get that key from behind the picture frame. Doesn't this key look a bit like our pin? I wish all these keys were pins (5 KEYS TO MY COLLECTION!!!) Anyway, let's move on. 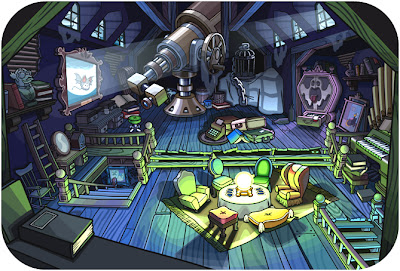 ...Ok. This is a graveyard. Go and cry at your lost siblings, families, grandparents, mums, or anybody or anything that has died in your life ;) Don't worry ~ they're living a lovely life as a ghost. 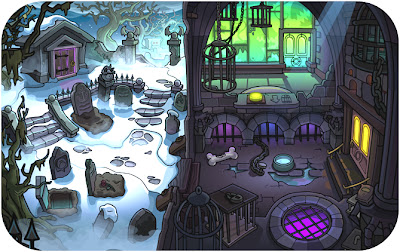 Ahhh, here it is. See that tombstone over there. There's a key in it! Grab it and head towards whatever way you wish to go. Avoid the slime pool, it smells a bit funny but who cares? Ghosts don't. Now, you've got all five keys so head back to the start if you can. 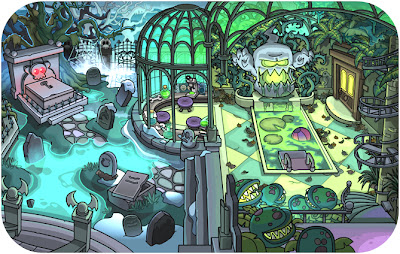 Oh my this really is creepy. How do you get down there or up there? When they said nine rooms, I didn't expect it to be a maze like the Brown Puffle Search or the Yeti Maze or the Herbert's Lair Maze. I love them, you should bring back more mazes. Oh wait, this is one. 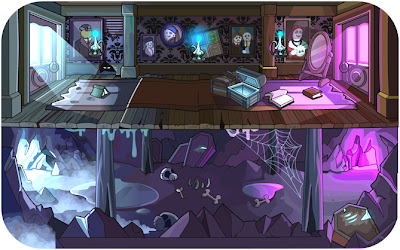 Ok, now go back to that room that's halfway. Remember? Now avoid that guy with the sharp axe. That was your closest chance of dying ~ unless you enter the ghost lab. Now, it's time to get killed. I advise you to not stab a knife through your heart yet, do it the painless way. Uncle will help you ;) 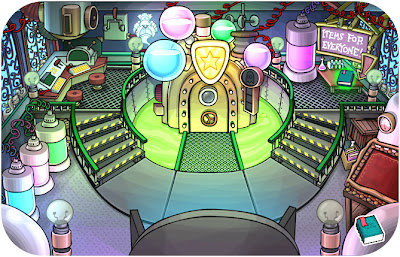 Now go scare penguins. Get items from the catalog. Hunt for ghosts. Wear your ghost goggles. Do whatever you fancy. And don't forget to stop by the Coffee Shop on October the 23rd and 24th.
Posted by Echo006 at Saturday, October 20, 2012