The Secrets of The Wilderness ~ Our Award

After rounding up the puffles, the team decided to head back to base and report to Aunt Arcitc about what we had found. Quickly, we teleported to the EPF Command Room and told her what we had found. She was shocked.
"Um, well, I hate to break it to you guys, " she started, "But that's not really what I wanted you to find!"
We were all sitting at the smashed up command room, and a message was on the board behind us. 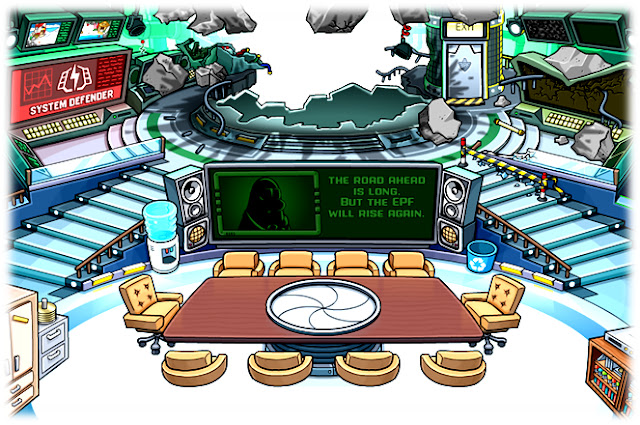 "Excuse me, Aunt Arctic," said Cliky Minty, "Didn't you send this team out looking in the wilderness, for something that they didn't know what it was?"
"Well, yes but that's classified for now young girl. You shouldn't even be here, but I'm sure you would fit in perfectly. Want to join the EPF?" replied Aunt Arctic. Cliky Minty nodded.
Polo Field asked Aunt Arctic what we were to do now. She told us to wait a minute, while she left and looked for some files.
"That was quite strange, don't you think?" asked Airplane.
"Sure, but atleast we found the rainbow puffles!" I added. Polo Field, Airplane, Brownie, Pizzapuffy, Pen Que, Cliky Minty, Bubsey Good, Perapin and I smiled. We turned around to where all the puffles were standing before, and were shocked and our eyes grew in wonder. The puffles had left, with my camera, and no traces of fur or anything! Surely there would be some more on the island - they couldn't of all left, could they? Our award had been nothing - we had searched for something we didn't know about, found something else and then it was gone. I was annoyed but Perapin cheered me up.
"Don't worry, guys! We can always try again next week!" he added. The Secrets of The Wilderness were still out there - maybe one day we could really find and adopt those rainbow puffles for real. It felt as if our memories had been wiped from the face of Club Penguin - like we couldn't remember what had just happened. I stopped in my tracks, and asked my team if they wanted a pizza. All the evidence had been erased from history - somehow the rainbow puffles had done it again, and disappeared without a trace.
"I'm afraid it's bad news," stated Aunt Arctic, "despite your efforts, you'll have to go back to the wilderness. Something has gone terribly wrong. All the communications are down, and the EPF technology is down. Quickly, you won't have time to teleport - but find out what is happening! GO!"