To read part one, click here.
18th Feb ~ I've stopped filming for Penguin High 3. Everyone was really nice there, and they said farewell, including Zowey! She's totally awesome. Anyway, I waddled over to the audition room for Set B at about ten o'clock in the morning. I had to do a scene with somebody, and it was Zowey! It turns out she's also auditioning for another part as one of the penguins who get chased by the police car in Scene 3.
I waddled up to her and said "Hey Zowey! Are you auditioning for this movie too? I had no idea!"
She replied with, "Yeah, I heard Bubsey, Pingywin and Woddylan are auditioning too. It's really popular, this movie. I'm sure you'll get the part." I was interrupted by the director who paired me and Zowey together, in the helicopter scene. I'd rehearsed this scene hundreds of times yesterday evening, but I hadn't done it with the other penguins in the scene. Luckily, I knew when to say my lines. In this movie, I have about twenty lines! I'm the pilot of the helicopter, the one who causes it to explode! But will I get the part? I really hope so. Stunts are my thing! I love jumping out of crazy explosions. Did you know that I even get to jump through glass of a second floor window and onto the floor out in the streets. I get badly injured, but it's still worth it! 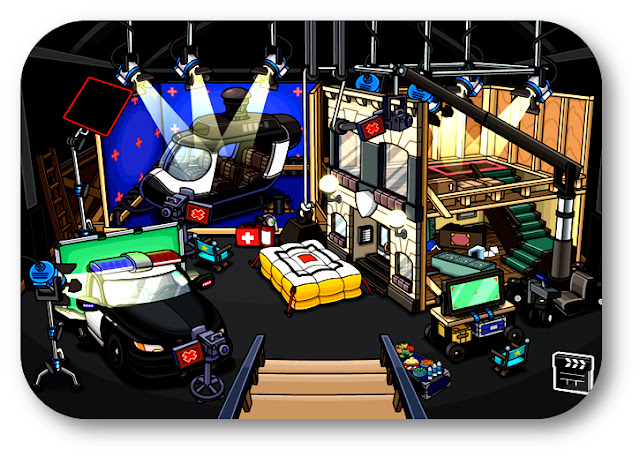 ...The audition starts, and I'm on the helicopter. I ask Zowey if she's ok, and she just nods. This is the hard part. I have to pretend to steer the helicopter sideways and then the power goes out and an explosion takes place. I jump up in shock, then tell Zowey to grab a parachute. This is the final scene that I'm doing my audition for. Zowey jumps out, landing perfectly. Now it's my turn. The worst part yet to come. I have to get this right. It must be perfect. The sirens blink. My first reaction was to just jump, but I couldn't. There was something wrong - something dangerous. The explosions were going off, quickly and almost destroying the set. What was happening? Was this my fault? I tried to calm myself down. Just get out of the helicopter, and everything will be fine. I stepped out, and the director was already shouting words that meant nothing to my brain which was crawling mad with questions. The whole helicopter exploded. I dived for the mat used to break my fall in Scene 3, when I fall from the building, and I'm safe. There wasn't much damage. The director shouts cut and comes over to me.
"That was perfect! You did exactly as you were meant to. Great work! You got the part, Echo."
"But that wasn't what was meant to happen! The helicopter shouldn't of exploded, that was all wrong. Look here," I shuddered, opening the script, "It says nothing about that giant explosion! I would've been killed, if I hadn't of jumped quickly enough. There was only meant to be little sparks."
"Oh don't worry about that. It was all part of the plan," continued the director, "We were just testing your skills. We wouldn't of done it if we knew that you couldn't escape from the explosion!
I ask for my limo, and I head out to the Snow Forts, getting in, avoiding the flashing cameras behind me.
To read part three, click here!
Posted by Echo006 at Monday, February 18, 2013