Thanks to Trainman1405 for these pictures ;) I'd like to say how ripped off I was back four years ago. It came to my attention this month that all the items were old and there were no new items. Many penguins don't remember this as they've all gone to do other things except a few like me so it doesn't really concern you. If you compare the prices of this catalog to the prices today you'll be surprised. Things like a TV costed 5000 coins! You could get three igloos with that. I thought we were in a recession but no, prices have got cheaper over the last four years! It was theratical themed and most of the items on this page were new at the time (I think they all were.) and that's when I got the Popcorn Machine and Ticket Booth. Now lets compare the prices... Look at this! The same price for both of the items ~ these are very rare and worth alot so I suggest you buy them but I'm not too sure about a Popcorn Machine being 1000 coins!﻿ 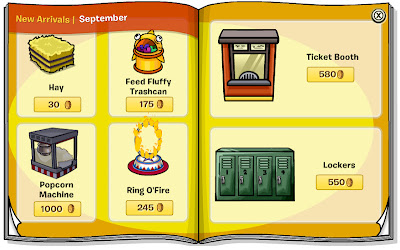 Next we come to some items that you may or may not have seen before. I have all of these including the Coffee Table which is one of my favourites. The Kitchen Sink and Pantry were available here as was the wall chalkboard which is now a whiteboard as penguins aren't as old-fashioned as I thought. ...Compare the prices again and you'll see that they're exactly the same! 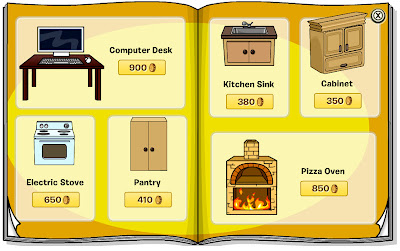 The Pizza Oven remains the same price ~ the stove is more modern as it is now electirc. I have all three types of stoves ~ the red stove, the stainless steel stove and the eletric stove. Here's where I made my mistake four years ago. Without thinking, I bought the Corner Booth Seat which isn't as rare as the straight both seat or the coffee couch now that the coffee shop has been redesigned! Only a small mistake but I could of been a lot rarer ;)﻿ Next we come to the Sunset Painting which was priced at around 900 coins this year but it was way more four years ago. I have all of the items here except the white plastic chair ~ it's too small for me anyway as Club Penguin made our penguins bigger they didn't think about the furniture being bigger. ﻿ Some notes and a stage which a harp (which I should of bought but didn't) for the real Music Jam not the silly Make Your Mark: Ultimate Jam though I did quite enjoy it but not as much as the old version.﻿ Next we come to some rarer items which I have all of them ~ the folding chair doesn't actually fold. The beach ball can be changed colours to green, blue, red and yellow. The barrel is smaller than it seems.﻿ Now we head towards the more expensive items. The security camera stays the same price ~ how I wish I got that lovely bench. I have everything else but it is VERY expensive. The TV was so not worth it ~ I should've got the moveable TV not a wall TV but that cost far too much as did the Piano.﻿ Do you notice things like this don't really often return ~ that's because the moderators like to be rare ;) I didn't buy the Coffee Shop tree because at this point I might not of had much money left. The surf beach towel is amazing as is the Big Screen TV which I would of LOVED to have but it was far too expensive.﻿ ﻿That pretty much sums it up and you can see the difference between four years ago and now. Let's hope these items come back soon like all the others!
Posted by Echo006 at Wednesday, September 19, 2012